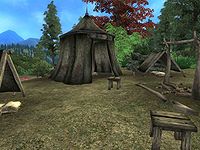 Ra'sava Camp is a campsite east of Kvatch containing bandits.

Located in high-risk territory along the Gold Road, this campsite often turns into a battlefield as the bandit inhabitants are often detected by both the residing Bitterfish Goblins guarding the exterior of Miscarcand a few feet away to the north, and the occasional Imperial Legion Soldier patrolling the road. The camp itself has been put up in a clearing at the end of a small cobbled path off the main road, and consists of a large tent and two smaller tents, all three with bedrolls. The large tent hides a copy of Brief History of the Empire, v 4 and a locked treasure chest with some valuables. Behind the tent, facing the road, are two barrels with clutter. A large, unlit campfire and a few stools make up the rest of the camp. Plenty of colorful flora are present as well, including three Flax plants and one Primrose plant near the road, two Morning Glory plants attached to a rock and a tall Willow Oak covered with two Cinnabar Polypore yellow caps and one red cap. Across the road lies Fort Istirus, where the Shade of the Revenant can be seen every eight days.