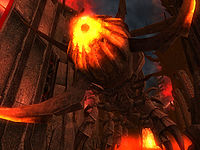 The Siege Crawler advancing towards the Great Gate

As soon as you step through the Great Gate, you will be given 15 minutes (real time) to complete this quest. Any longer and the indestructible Daedric Siege Engine will make it to Tamriel, resulting in Martin's death and the invasion of all Tamriel by Daedra. At that point, the game is over: you must reload an earlier save game. This quest can also be terminated if Martin dies while you are in the Great Gate Oblivion World (although the combat in Tamriel actually pauses while you are in there, so Martin can only die if he receives a fatal blow just as you step into the Gate).

Fifteen minutes is a relatively short time to get through this world, but not so short that you need to panic. A normal run should take 10 to 12 minutes. Even if you get lost on the way to the main tower, as long as you make it to the bottom of the tower with two minutes to spare, you should still be able to finish the quest as long as you can avoid stopping to fight anyone.

You can generally decrease the time it takes to complete this quest by:

More specific strategies are listed throughout the guide.

Layout of the WorldEdit

When you first step through the Great Gate, you will see a huge war gate in front of you that is just starting to open. On the far side of the war gate is the ominous Siege Crawler, which over the next 15 minutes will slowly walk forward towards the great gate. The Siege Crawler does not pose any immediate threat to you, but will periodically shoot a volley of Fire spells at you, which can be deadly. The many fire towers in the area and the couple of Daedra accompanying the Siege Crawler can also be lethal.

The one other feature of interest in this world is a cave system, The Smoke and Scorch, which leads you to the bottom levels of the final two World Breaker Guards. The exterior of this world is barren; there are the usual Oblivion plants and a few Dremora.

The most direct way to get to the main tower is to ignore the first four World Breaker Guards. Instead, run towards the Siege Crawler, following the left-hand (western) lava shore. It is possible to run along this shore without stepping in the lava, although you will be under constant attack from the numerous fire towers in this area; if you can survive some lava damage, you may also choose to just swim through, run over, or jump across the lava. Once you pass the middle pair of World Breaker Guard towers (probably shortly after you reach the Siege Crawler), jog to the west to get under the bridge. Continue north and you should run straight into the door to the cave system. This can be done in less than a minute. Fight your way through the caves into either one of the two final World Breaker Guard towers. Ascend the tower and activate the Gate Control.

Enter one of the first two World Breaker Guard towers. This allows you to keep well clear of the lava and avoid a few fire towers. On the downside, you will have to fight or evade a couple of creatures in each tower, and waste some time running up and down and riding Corpse Mashers. Each tower has two doors leading to high-level narrow bridges that connect to the second set of World Breaker Guard towers. Descend in that tower to the lower level door, which lets you out onto one of the wide bridges continuing northwards. Alternatively, if you have high health or Acrobatics, after entering the second tower, take the door on the same level as the one you entered through to get to the bridge that joins the middle two towers and jump off. This method is quicker, but comes at the expense of health. Your next problem is that these bridges have collapsed - on both sides. You can try to jump across the broken spans, or jump down and make it across the broken terrain underneath.

It is possible to make your way on the surface to the exterior doors to each of the final two World Breaker Guard towers. If you can jump the broken spans of bridges, you are on a path that leads right to the towers. Otherwise, you need to work your away around the many rocks and cliffs on the surface to reach the entrance. By taking the surface route, you avoid a couple of creatures and avoid a slow ride up the Corpse Masher. On the other hand, you can waste a lot of time finding your way through the rocks, and you also miss some of the little loot available in this world. 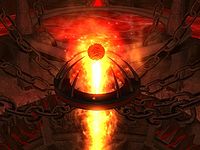 The World Breaker tower is a fairly standard Oblivion tower, with a Sigillum Sanguis at the top where you will find the Great Sigil Stone. In the lower level there is just one Dremora, the Sigil Keeper. If your lockpicking skills are poor, you will probably want to stop and kill him, because he possesses the Sigil Key that opens the Sigillum Sanguis. If you miss him, there is a second Sigil Keeper at the top of the tower.

From the ground floor, you will enter the Vaults of End Times. Ascend the first corridor, watching out for the three guillotine traps. The corridor leads to a room with three possible exits. The way upwards is through the door on your left (on the south side of the room); the right door leads to a punished loot container guarded by an Atronach.

Continue upwards in the main tower to the Sigillum Sanguis. In the Sigillum Sanguis, you probably want to stop and find two of the Punished, which contain treasure. Then grab the Great Sigil Stone. Like other quest-related Sigil towers, Sigil stones can be taken multiple times. However, this tower will only donate Great Sigil Stones, and Martin will only take one, so don't go overboard here or you will be left with useless items in your inventory. 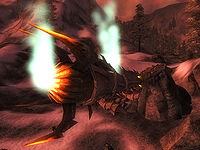 The battle is over, but the destroyed Siege Crawler remains

You will arrive back on the battle field underneath the Siege Crawler, which will immediately collapse around you when the Great Gate closes. No matter how quickly you complete the quest, the Siege Crawler will always have emerged partway through the gate. On the ground you will find a standard Sigil Stone, leveled as usual, that drops from the Siege Crawler when it shuts down. Sometimes you have to activate the siege machine to release the Sigil Stone.

Help clean up any remaining Daedra or Dremora. Martin is once again essential, so do not worry about keeping him alive. If there are any other survivors of the battle, they will start clapping. Talk to Martin, who will take the Great Sigil Stone from you and tell you to meet him at Cloud Ruler Temple when you are ready for the next quest... ready to enter Mankar Camoran's Paradise.

A statue built in your honor

When you return to Bruma from Cloud Ruler Temple, you will find a statue of you as the Savior of Bruma, located to your right when entering the city from the North Gate. The statue's appearance is determined (and it spawns) the moment you enter a "new" cell occupied by Martin. This will usually be when you open the door to Cloud Ruler Temple after he has returned there, but can also be on the road to it if you intercept him along the way. The armor and weapon will be the best quality items that you had in your inventory at the time, not necessarily the items that you had equipped.

The game determines the "best" items - not just the most expensive items - taking into account enchantments; for example, the Dark Brotherhood Black Hand Robe has zero value but will take precedence over many other items, including some magical armor. The game calculates the value of items through its Gold Septims value, armor protection, and the amount of enchantments, in that order the latter being the "best". If you are very particular about the appearance of your statue, it is recommended that you leave all of your additional items in a safe place before talking to Martin. If you possess a quest item that cannot be removed that you do not wish your statue to wear, it is still possible to work around this; see the Notes below.