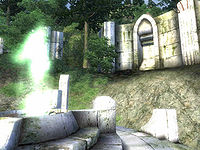 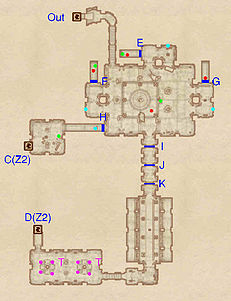 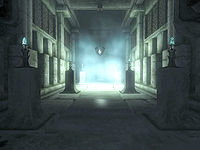 The Hall of Stones inside Ondo

This zone has surprisingly few enemies guarding it; only one monster and some zombies are here to stop you, all inhabiting the first room in this dungeon. Although the dungeon may at first appear empty but for that one monster, activating any nearby push blocks will open some hidden doors at E, F, and G, all of which will release a zombie each. However, with two of these zombies are two loot chests, so dealing with the undead may be worth it for the extra treasure.

From this room, the only obstacle you have to worry about are the gas traps in the last room (marked as T on map), which can't easily be avoided.

There is an additional area in this zone which can only be accessed from Ondo Canohaelia, specifically from door C that connects to that zone. In this area is a minor Ayleid cask and a push block that opens door H on map. This allows easy access back to the first zone after completing the second zone,

This zone is somewhat less linear the first zone, but it is still relatively straight-forward. You'll enter from door D from the first zone, into a large room dominated by a Gas Room trap (E/F) in it's center. Navigating around it while dealing with the two nearby enemies may prove difficult. A Varla stone is positioned on its pedestal at location V on map in this room, with a cask nearby as well.

From here, there's a gate (H) blocking access to this zone's boss area. To open it, you'll have to travel into the large chamber south of here and activate the respective push block (cyan dot on map). Note that activating this push block also unleashes a zombie hidden behind secret door I on map. Behind this door is also a boss-level Ayleid coffer. In addition, there are a few Ayleid casks located in the southern area, but all are guarded by enemies.

After gate H is the boss chamber, with its expected boss creature (A) and boss-level chest (B). Defeat or evade the boss, loot the reliquary, and exit this zone by taking door C.