Be sure to save before this part as there will be a lot of action going on at once and a game crash is common. Do not attempt to save in the middle of a wave of Daedra, as your game may freeze while saving, rendering it as an un-loadable corrupt file and forcing you to load from a previous save [citation needed].

Just before you deliver the Great Welkynd Stone from the last quest, you'll see Martin (now hopefully wearing armor: if he is still in robes, see Bugs) and Jauffre debating about something. After they finish, talk to Martin, give him the stone and he'll fill you in on the last requirement: a Great Sigil Stone. The only way to get one is to allow the Mythic Dawn to open a Great Gate near Bruma.

Escort Martin, Jauffre and Baurus (if he didn't die in the Imperial City sewers during or after The Path of Dawn) to the Chapel of Talos, then go to Castle Bruma to speak with the Countess. Tell her the plan and she will follow you to the chapel where she will meet with Martin. This is the last chance you have to acquire Allies for Bruma.

Speak to the countess when you are ready to begin the quest proper and she will order Captain Burd to organize the troops. Follow Martin past the cheering crowd and out of the city.

Lead the Charge Once MoreEdit 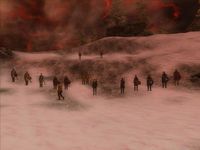 Martin rallying the defenders of Bruma

Your army is waiting here and consists of Captain Burd and his guards plus any allies you gained in Allies for Bruma. Obviously the more troops you have, the easier the next part will be. Make your way to the battlefield where an Oblivion Gate is already open. Martin will rally the troops and a wave of Daedra will come through the gate. Depending on your current battle skills, you should be able to deal with the Daedra of the first gate by yourself. The troops won't attack until the Daedra come quite close to their line. Soon a second gate will open and waves of Daedra will come out of that too. Then a third gate and finally the huge Great Gate itself. Your objective is to keep Martin alive until you enter the Great Gate - if Martin dies, the game is immediately over and you must load a previous save. You do not have to kill every enemy in this mission (they will keep on spawning from the Oblivion Gates at regular intervals). Wait for the Great Oblivion Gate to open and enter the gate to complete this quest.

You need to keep Martin alive — this makes the first part of the quest unique, and if you are not prepared, it could be a real headache. Also, note that you cannot leave the area once the battle has started, other than to enter the Great Gate. If you travel anywhere else, Martin will automatically die 15 seconds later. There are many ways to improve your chances in this battle:

Once you enter the Great GateEdit

Then click on him again (so that Martin's ID clears from the top of the screen), and type player.setstage MQ12 30