During this quest, Baurus becomes non-essential, so before going on this quest, it is recommended to obtain some Convalescence spells to assist in keeping him alive.

Talk to Jauffre after escorting him and Martin to Cloud Ruler Temple. Now that Martin is safe and secure, the next obvious step is to retrieve the Amulet of Kings so that Martin can light the Dragonfires. Anticipating this course of action, Baurus, the only Blade present at the Emperor's assassination to survive, has been gathering intelligence in the Imperial City. The two of you are to work in conjunction to retrieve the Amulet. You can find Baurus at Luther Broad's Boarding House in the Elven Gardens District.

Inside, you'll find Baurus sitting down and drinking. There may be a different assortment of people in the bar, depending on when you arrive, but one customer, Astav Wirich, is always present. Have a seat next to Baurus and chat with him. In the course of his intelligence-gathering, he has attracted unwanted attention and is being stalked. Suspicious of Astav, Baurus formulates a sting operation: He will leave to the secluded basement in the hope the man will follow. Sure enough, as Baurus leaves Astav follows. Head downstairs and intercept him.

When Astav discovers that he has an opportunity to strike Baurus down without Imperial interference, he'll summon his Mythic Dawn gear and try to assassinate him. Although the fight is pretty one sided in Baurus' favor, Baurus won't mind if you fight Astav from the rear. After Astav is dead, Baurus will instruct you to check his body for anything useful. You'll find a strange book entitled Mythic Dawn Commentaries 1. Show it to Baurus, and he will suggest that you talk to Tar-Meena, an expert of Daedric Cults, in the Arcane University, who may be able to tell you more about the book.

Travel to the Arcane University, located in the southeastern corner of the Imperial City. If you have completed Join the Mages Guild, Tar-Meena will be wandering around the Mystic Archives. If not she will be found reading in the Arch-Mage's Lobby. Talk to her about the Mythic Dawn, and find out more about this cult and its patriarch, Mankar Camoran. She says that you will need the complete set of the Mythic Dawn Commentaries, also known as Commentaries on the Mysterium Xarxes, to find their headquarters. She offers you the second book, which leaves you to find Books Three and Four.

Find Phintias at the First Edition

Tar-Meena suggests that you visit the First Edition bookstore and speak with Phintias, the proprietor, who may have some information about the last two volumes. His bookstore is in the Market District on the northeast side of the Imperial City, near the center of the district. Upon arriving, ask Phintias about the Mysterium Xarxes. He'll say that while Books One and Two are rare, Books Three and Four are next to impossible to find. He does happen to have a copy of the third, but it has already been paid for by another customer, Gwinas. As for Book Four, he states that he has never even seen a copy of it and has absolutely no idea on where you would find one.

To obtain the third book at this point, you have a few options:

Volume Four can only be obtained from a member of the Mythic Dawn. Gwinas has set up a meeting, of which he'll tell you the time and place, with his sponsor, Raven Camoran. You must go in his place to receive the fourth and final volume. 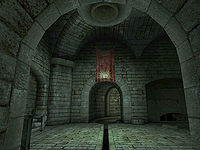 As the quest log suggests, go see Baurus back at the Boarding House before heading out to the meeting and let him know what you've found so far. Accompany him through the rather long Elven Garden Sewers where you'll encounter a few mud crabs and leveled goblins. There is very little loot throughout the sewers, so a direct route to the meeting place is advised. Rather annoyingly, Baurus remains walking the entire path and will stop walking if you run ahead, and you may find yourself backtracking often to retrieve him.

As you follow Baurus through the sewers, periodically heal him to keep him at full strength. Heal him again just before entering the final door to the meeting area. He'll let you know when that is. This will keep him alive through the sewers and, if necessary, throughout the fight. If you do not have a Convalescence spell, waiting will heal both of you at the same time. However, this will not work in the middle of a battle. The fight with the Mythic Dawn agents at the meeting area can be rather difficult, especially if you want to keep Baurus alive. Keeping Baurus alive is recommended because he can be a big help at lower levels, and also during the other battles in the Main Quest. Additionally, if you meet Baurus at the Cloud Ruler Temple after he and you travel through the sewers, he will thank you and give you a free skill increase in Blade, Block, and Heavy Armor. You may also wish to take the lead in order to protect Baurus on the way, since he is no longer essential. If you get too far ahead of him, he'll simply wait for you to come close enough to continue on. Once you reach the meeting area, Baurus suggests that you cover him, although, you can take the lead and have him cover you if you insist. In this path though, he will be discovered and attacked. Whatever happens, he says, you must try to get the book and recover the Amulet of Kings. At this point, it is a good idea to rest or apply a Convalescence Spell to Baurus if you have one. Saving your game is also an excellent idea.

There are many possible ways to continue from here, including the following: 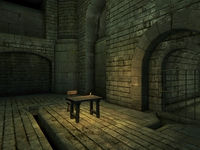 Loot Book Four from the Sponsor along with a level-dependent ring, a Sunken Sewers Key, a potion, and a scroll. Be sure to thoroughly explore the Mythic Dawn room as well, where there are three crates and three chests, including one boss-level chest that may contain additional enchanted items as well as additional copies of Mythic Dawn Commentaries Books One to Three.

Once you have the book, you will part ways with Baurus, who states that he'll go to Cloud Ruler Temple to help protect Martin. It is possible for Baurus to die while making his way back to the temple. Exit the sewers either the way you came or through the new area unlocked by the Sunken Sewers Key you retrieved from the cultists. You can also return to outside the cult room, take an immediate left into the next room and then exit up a ladder into Fathis Ules' basement. This method involves trespassing, but it's the quickest way to the surface. 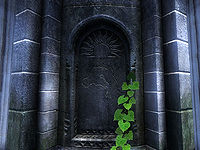 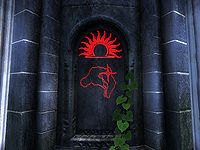 The four books each contain a clue as to the location of the cult. You should be able to figure it out by reading the texts but if you need help, go to Tar-Meena at the Arcane University. She'll think about the puzzle and asks you to get back to her tomorrow afternoon to see if she's made progress. If you wait a day and then ask her about the Mythic Dawn, she will tell you that she is sure that the key to the mystery lies in the first word—or even first letter—of each paragraph in the Commentaries....

Look at the large red letters that begin the paragraphs in the book. Put them all together to read: GREEN EMPEROR WAY WHERE TOWER TOUCHES MIDDAY SUN.

Green Emperor Way is the central district of the Imperial City, where the Imperial Palace is located. If you are going strictly by the clue from the books, you should wait until nearly midday. Look for the shadow of the White Gold Tower, and walk to the end of the shadow. If you look up, the tip of the tower should be touching the middle of the sun. You should be standing right in front of the Tomb of Prince Camarril, where a set of red runes are glowing to reveal the location of the Mythic Dawn shrine. Click to activate the tomb and advance the quest.

If you're following the quest marker, there's no need to pay attention to the sun's shadow: you can follow the quest marker straight to the Tomb of Prince Camarril, located just south of the gate leading to the Talos Plaza District. You don't even need to talk to Tar-Meena. At any time after obtaining the fourth volume you can go to Green Emperor Way to advance the quest. The runes on the tomb will only glow from 11:48am to 12:30pm. You need to be standing on the south side of the tomb with the palace positioned behind the tomb to see the runes. The runes on the tomb actually glow every day from the very beginning of the game, but it is only possible to activate the tomb during this quest.