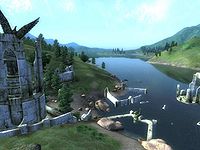 Culotte is a small Ayleid ruin southeast of the Imperial City containing undead (quest-related). It contains only one zone, Culotte. 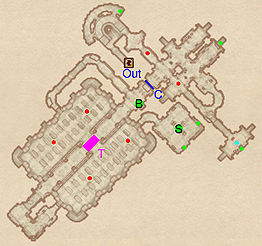 The dungeon is at first completely empty. The six zombies only appear after you have entered the room containing the Ayleid Statue (at S on the map). They appear even if you do not pick up the statue. To open gate C, which initially blocks your way, you will have to go down the stairs to the left and step on the pressure plate (cyan dot on map). The crumbling bridge trap (T) forces you to return to the entrance using the northern passageway out of the main room. This conveniently leads you to the boss-level Ayleid coffer (B), which is on an upper level and therefore cannot be accessed your first time past it.