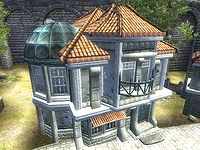 Arvena Thelas' House is a house situated between the Guildgate and Westgate districts of Anvil. The house is between the local inn, The Count's Arms and Morvayn's Peacemakers, and adjacent is to Silgor Bradus' House. 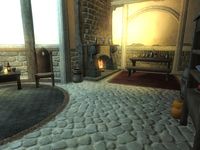 The front door opens to a staircase directly ahead leading to the second floor. The main part of the home is to the left of the front door. The main floor is a large, pleasantly lit dining and lounge area. A shelf along the southern wall holds several books as well as a shopping list. A small desk nearby contains clutter and several crumpled pieces of paper are scattered on the floor. The seating area nearby has a bottle of ale and a copy of the book Gods and Worship. Along the eastern wall a shelf holds a portion of beef and an assortment of tableware. Next to the shelf are several sacks containing clutter, two pumpkins, and a barrel containing an assortment of food. A laid out dining table along the northern wall offers three corn cobs, a bottle of mead, two potatoes, a sweetcake and sweetroll, two portions of crab meat and some cheese. The cheery fireplace illuminates the area and an open sack containing grain is nearby. The door to the basement is on the northeast wall. 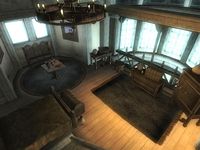 The second floor of the house is the master's chambers. The first room is a small living room with a cozy fireplace, but little of interest. The master bedroom has the usual assortment of furniture. A small cupboard contains common clothes and a pair of pigskin shoes is underneath. The sack on top contains only clutter. Nearby is a dresser containing more clothes. On top of the dresser is a bronze amulet, a weak poison of sickness and a locked chest containing minor loot. The small table with a lectern has only clutter, but a pair of quilted shoes and thick cowhide shoes are found underneath. The double bed is situated along the eastern wall and at the foot is a locked chest containing either armor or weaponry. Another small table is situated in an alcove along the southern side of the room with a copy of Beggar Prince, and a brass pearl ring on top of the book. The several sacks and barrel found behind the door contain only clutter. 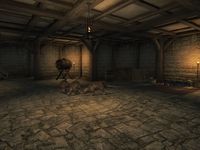 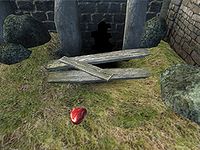 The hole into the basement

The basement is very spacious and home to Arvena's four pet rats. A small cupboard just to the left of the stairs contains only clutter, as do the many barrels and crates scattered about the basement. An alcove in the eastern wall holds three wine racks and several bottles of Surilie Brothers Wine, Tamika's West Weald Wine and cheap wine. Along the northern wall several cheese wedges are on the floor, as well as some leeks and apples; presumably for the rats. There is a hole in the foundation of the house in the alcove on the western wall. Several samples of Cairn Bolete are growing here. The hole is the reason a mountain lion can be found in the basement during the related quest.