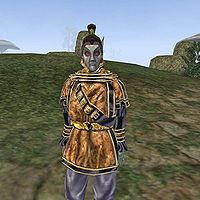 Tarvyn Faren is a Dark Elf trader who can be found just outside the northern gate of Vivec waiting for an escort to take him to Pelagiad. He is a merchant, but has nothing of particular value to sell.