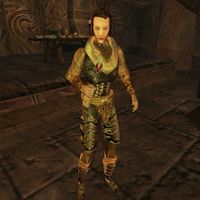 Severa Magia is an Imperial assassin, and is the local Night Mother (guildmaster) of the Dark Brotherhood. Severa Magia can be found hiding in the Lower Level of Ald Sotha. Seek her out and send her soul to Sithis as part of a Morag Tong quest.

Severa Magia will put up quite a fight; although she is only wearing a few pieces of Netch Leather Armor (more specifically, the greaves and boots from that set), along with a Boiled Netch Leather Cuirass and a pair of cloth bracers, she's brandishing a Daedric Tanto and seven Daedric Darts. She also holds the Glove of Sanguine Swiftblade, the Ring of Sanguine Fluid Evasion, and the Amulet of Sanguine Nimble Armor, all of which help her fend off challengers. Underneath her armor, she wears a common shirt and common pants. Aside from her natural charm and ability to absorb fatigue from others, she knows no spells