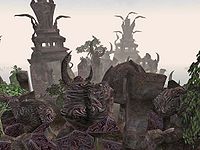 Ald Sotha is a shrine to Mehrunes Dagon, located on a scenic island just east by northeast of Vivec.

The shrine is an expansive Daedric ruin. The exterior ruins contain a couple of leveled daedra, and a number of other creatures hostile to explorers. You will also encounter witchhunter Nathala Herendas, and knight Mivul Urvon. Both will talk with you should you choose to do so. Mivul is wearing bonemold armor and brandishing a long blade. Nathala is brandishing a silver staff and has a wide variety of spells at her disposal.

The entrance to the interior of the ruins requires a wade offshore into the surrounding waters, which are infested with slaughterfish.

The interior of Ald Sotha has three levels: the Upper Level, the Lower Level, and the Shrine. The entrance to the interior brings you into the Upper Level of Ald Sotha, which contains two leveled Dremora Lords and three hostile worshippers, who are protecting Severa Magia located in the Lower Level. In the Lower Level you'll find three leveled Dremora, and Imperial assassin Severa Magia. You'll also find a number of books, potions, scrolls, and a bottle of Ancient Dagoth Brandy in the chamber where Severa is located. The Shrine contains the altar to Mehrunes Dagon, the mage Llandrale Varam, a leveled Dremora, and a leveled Daedra. Behind the statue on the altar is a chest containing 500 gold septims and the Shoes of St. Rilms; there are two additional chests behind the altar containing a variety of potions, scrolls, books, and other loot. On the altar you'll find a grand soul gem, a diamond, and an ebony broadsword (which is cursed).

Eno Hlaalu, the Morag Tong leader requests that you execute Severa Magia, the Dark Brotherhood Night Mother. There are six Threads of the Webspinner objects here, used in the special duties Morag Tong quest by Eno Hlaalu. A Tribunal Temple quest requires you to get the Shoes of St. Rilms from a locked (50) chest here.