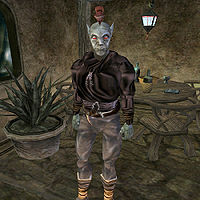 Thanelen Velas, a Dark Elf smith, is a Tough for the Camonna Tong. Thanelen Velas can be found at the Council Club in Balmora. He is part of two quests, both of which involve killing him.

He wears a common shirt with matching pants and shoes. Furthermore, he carries a dwarven war axe, 200 drakes and a repleneshing stock of apprentice's armorer's hammers and journeyman's armorer's hammers (ten each) with him. Aside from his natural resistance to fire and the sanctuary provided by his ancestors, he knows no spells.

If you confront Thanelen Velas with the fact that he matches the murderer's description, he will try and frame Nine-Toes as the culprit:

Should you kill Nine-Toes instead of Thanelen and return to the latter after you have finished the quest, Thanelen will say: