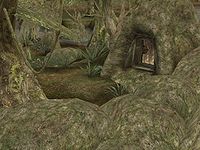 This cave is used as a Sixth House base, and you will be sent there by Caius Cosades as part of the Main Quest.

Ilunibi is divided into five sections:

Ilunibi, Carcass of the Saint is the entrance section. Just inside the entrance you'll find a very nice little waterfall - possibly the only pleasant part of the entire cave. The rest of the cave is mostly flooded to about knee-deep, and filled with various Ash and Corprus creatures - and one dead adventurer, who should be wearing a whole lot of pretty much random stuff. There are two exits, to "Tainted Marrow" in the southeast and "Marowak's Spine" in the southwest.

Ilunibi, Tainted Marrow is a section of Ilunibi that can in fact be completely skipped. It contains nothing except one dead body with random equipment, several Sixth House/Ash creatures, one random Daedra and two exits to "Marowak's Spine".

Ilunibi, Marowak's Spine is also comparatively uninteresting. Like the Carcass of the Saint, it's flooded to about knee-deep: and like Tainted Marrow, it contains little of interest - random Sixth House, Ash, Daedric and Undead creatures, a Dreamer or two, and a dead body with random equipment. One exit leads back to the "Carcass of the Saint", two lead sideways to the "Tainted Marrow", and one leads onward to the next section, "Blackened Heart".

Ilunibi, Blackened Heart, in terms of content, is no more interesting than the previous three sections - random Sixth House, Ash, and undead creatures, and once again flooded to knee-deep. The entrance to the final section, "Soul's Rattle", is guarded by a random Daedric creature.

Ilunibi, Soul's Rattle is the ultimate goal of exploring this cave. Filled, as usual, with random Sixth House creatures and Dreamers and at least one Daedric creature, it is the home of Dagoth Gares, a unique Ash Ghoul, master of this Sixth House shrine, who will talk to you before fighting, and from whom it is possible to learn a surprising amount of the history of Dagoth Ur and Nerevar, at least as seen from Dagoth's perspective. Killing him will advance the game's main quest, and provide an unpleasant surprise... 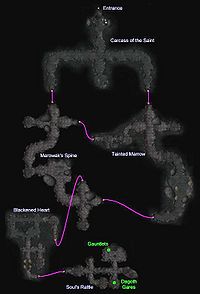 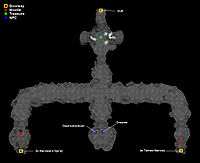 Map of Ilunibi, Carcass of the Saint 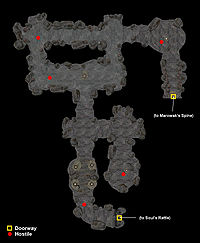 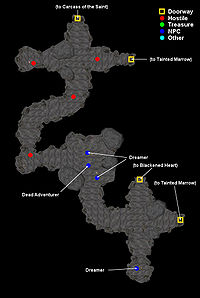 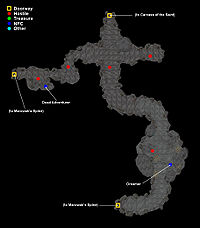