For the Dreamer class, see Dreamer. 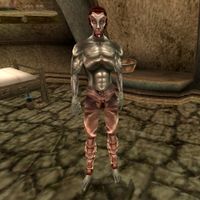 Dreamers are crazed, fanatical cultists who serve Dagoth Ur. Dreamers are notable for their near complete lack of equipment, wearing only their (invisible) faith on top of their underwear, and carrying only a club and some tasty corprusmeat. They have abandoned the trappings of civilization to stay in caves and revel in the glory of Dagoth Ur, waiting for the promised xenophobic war and attempting to bludgeon to death any unbelievers who enter their lairs in the meantime.

Dreamers, being bigots in the service of Dagoth Ur, will attempt to kill any who approach them who do not serve Dagoth Ur; they can sometimes be found near the dead bodies of former victims, and will attack you on sight. If they are calmed by use of a spell, they can be conversed with and persuaded, but due to their high aggression, even a disposition of 100 will be insufficient to spare you from their murderous rage after the expiration of the spell.

"I dream dreams, soul of the Sixth House, flesh of Lord Dagoth."

"Lord Dagoth has sent the blight to destroy the foreigners, and to chasten those Dunmer who bend to foreign will. Those who oppose Lord Dagoth shall wither and die, while those who join Lord Dagoth shall be healed and strengthened, filled with the power and glory of Red Mountain, and inspired by the dreams of Dagoth Ur."

[Disposition drops by 10] "It is the Hour of Wakening. He comes forth in his glory, and his people shall rejoice, and his enemies shall scatter like dust."

"My starkest madness seeming is divinest sense. Come! Grasp the chain, and prove you're sane!"

"We are the Dunmer. Once this was the Dunmer's land, and it will be once again."

"The Great Houses have always fought among themselves. Long ago they banded together against one house, House Dagoth, and falsely denounced the house as traitors, and thought to destroy House Dagoth for all eternity. But they failed, for House Dagoth was but sleeping, and now has awakened. Now all the Great Houses must join House Dagoth to drive the foreigners and false gods from our soil."

"It is not a rumor. It is the truth. Lord Dagoth, Dagoth Ur, Lord of the Sixth House, and Savior of the Dunmer people, has awakened. And with him shall all sleepers awaken, and Morrowind shall be cleansed of the stain of false gods and foreign rule."

"Morrowind is the ancient homeland of the Dunmer people. Once, in ancient days, when the Dunmer ruled themselves in their own land, this place was called Resdayn. Now we are weak -- no more than slaves -- ruled by foreigners who serve false gods. But now Lord Dagoth, Dagoth Ur, Lord of the Sixth House, has awakened. Now the restless shall wake from sleep, and this will once more be the land of the free and proud Dunmer."

"Necromancy is the evil sorcery of the invaders, an abomination to our ancestors. All true Dunmer worship their ancestors, and honor their traditions. Our ancestors now are mad with shame and hatred, seeing us brought low by beasts and lesser races. Only when we have driven the foreigners from the land can our ancestors rest."

"Prophecies say Lord Nerevar will come again to drive the foreigners from the land and restore the Dunmer and Morrowind to its ancient glory."

"Red Mountain is the heart of Morrowind. There Lord Dagoth Ur dwells, and from Red Mountain he shall come to drive out the foreigners and restore the ancient glories of the Dunmer. Go to him, beneath Red Mountain, kneel before him, and he will show you mercy, and gather you into his household."

"The Dunmer people have all been slaves, sleeping in shame, serving the outland overlords like meek children. But now the sleepers awake, and shall be slaves no longer. Now we shall be the Dunmer once again, free and proud -- rulers, not ruled."

"Vampires are loathsome monsters, creations of false gods and Western necromancers. The kinsmen of Lord Dagoth have been called 'ash vampires' by the ignorant, but they are not vampire in any way. They are wise and powerful, long-lived and masterful in sorcery -- but they are ageless, immortal wizards, like all of Lord Dagoth's kin -- and not vampires."

The vast majority of Dreamers are called, simply, "Dreamer". however, there are two which break the mold.