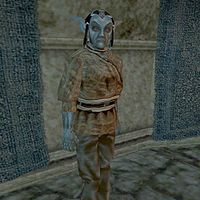 Galtis Guvron is a Dark Elf pawnbroker who can be found at The Rat in the Pot in Ald'ruhn. He doesn't have much in the way of wares, but what he does sell tells a lot about him - he apparently has ties to the Sixth House, and has been tasked with placing ash statues around the city. The note you'll find on him explains it all.