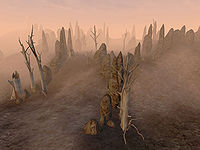 Bal Isra is a barren location in the western Ashlands roughly between Ald'ruhn and Maar Gan. The name means "row of stones" in Dark Elvish.

It is the site of Indarys Manor, the House Redoran stronghold constructed in the Ashlands. Traveling from Ald'ruhn, follow the signposts toward Maar Gan. Bal Isra is on the east (right) side of the road, about midway between the Odibaal cave and the Mila-Nipal Ashlander encampment.

These people only appear here once you start your Stronghold.