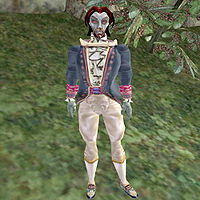 Edras Oril is a Dark Elf savant who is studying the flora and fauna of the Ascadian Isles with his colleague, Thoronor. Unfortunately, while conducting their studies near the Fields of Kummu, the two have become separated and need your help.

Edras wears an extravagant shirt with matching pants, belt, and shoes. He also carries up to 40 gold. Aside from his natural resistance to fire and the sanctuary provided by his ancestors, he knows no spells.

You can find Edras standing near the road that leads from Pelagiad to Suran, hiding away from a small group of kagouti that seems to have trapped him there. If you speak with him, he expresses his relief that someone has finally found him:

If you have already met Thoronor and have moreover dealt with the kagouti, you can tell him that you have already spoken to his friend, which will prompt him to follow you back to where the Wood Elf stands:

Once the quest has been completed (you should talk to Thoronor to get your reward), you can speak with him a bit more: