During the last quest to destroy the Sixth House base near Gnaar Mok, you contracted the apparently incurable Corprus Disease. While you have Corprus, the disposition of anyone you talk to will drop significantly, so it's a good idea to return to Caius as soon as possible. Back in Balmora, Caius is shocked to hear of your condition, but believes there may be hope. He has learned from Fast Eddie, a local Telvanni expert, that a Telvanni wizard named Divayth Fyr runs a Corprusarium deep beneath his tower in Tel Fyr, dedicated to the study of Corprus disease, and is your best chance for a cure. Apparently, Fyr is a collector of Dwemer artifacts, and Caius provides you with a Dwemer Coherer to help raise Divayth's disposition. You will also receive 1000 gold to pay for your expenses and a few levitation potions for use in the tower. The artifact weighs 40 pounds, so be sure you're able to carry that much.

Tel Fyr is on an island in the eastern archipelago of Vvardenfell, in the Azura's Coast Region. Caius will mark it on your map if you ask him about it, and suggests you speak with Sondryn Irathi at the Sadrith Mora Fighters Guild for detailed directions. The fastest way to get there is to take a Guild Guide over to Sadrith Mora; alternatively, you can take a boat to Sadrith Mora from Ebonheart.

Once inside Tel Fyr, Onyx Hall, you should talk to Beyte Fyr, a Dark Elf woman, across from the entrance to find out that Divayth is in his study, accessible by the main fly well. The fly well is upstairs in the Hall of Fyr, inside and to the right of the entrance. If you need more Levitation or Invisibility potions, you can steal them from a shelf in the bedroom on the main floor of the Hall of Fyr. Levitate up and find Divayth, dressed in Daedric armor and standing in front of a purple crystal. Give him the Dwemer artifact and ask him about corprus disease. You may have to additionally raise his Disposition through persuasion or other means in order to get him to talk to you. Divayth has plenty to say about the disease, but mention that you may fulfill the Nerevarine Prophecies and he will quickly offer you an experimental and possibly fatal cure for Corprus. However, before he agrees to give you the cure, he will ask you to fetch a pair of enchanted boots from Yagrum Bagarn in the Corprusarium below and return them to him. On the face of it, this is a menial chore, but Fyr's real intention is for you to see the place in which you will spend the rest of your life if the cure doesn't work.

If you have angered Divayth previously by killing some of the members of the Corprusarium, you may be able to persuade him to assist you, either with conversation or magic, but if you have killed the warden, he and his daughters will attack you when you talk to them. Sometimes Divayth is extremely mad about what you have done, and presents you with no conversation options except "Goodbye". Fortifying your personality may fix this issue, changing his greeting dialogue to allow you to speak with him. The best way to achieve this is by using several Telvanni Bug Musk potions, which can be bought from Cienne Sintieve. If all else fails, you can use the console to advance the quest by entering SetJournalIndex A2_3_CorprusKiller 30. 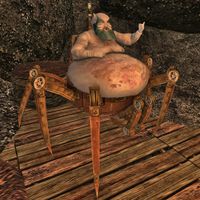 The Corprusarium is downstairs, through the Onyx Hall. Before you enter, you will encounter the warden Vistha-Kai who will tell you not to harm the inmates, though they certainly have no qualms about hurting you. This is a good place for Invisibility or Chameleon if you have it, or a good Sneak skill. If you have Drain Fatigue or Damage Fatigue magic, you can use that (or the Hand-to-hand skill) to knock out the Corprus Stalkers and Lame Corpruses in the area, without triggering any alarm on the part of the Fyrs or Vistha-Kai (even if you injure the Corprus creatures a bit while knocked out, as long as you kill none of them and hit them with no weapons or damaging spells). The easiest strategy may be to simply run past the Corprus victims and head straight for the Corprusarium Bowels while ignoring any attacks. Fortunately, once you enter the Corprusarium Bowels, none of the inmates you encounter will be hostile towards you. Yagrum is in the central cave, and is hard to miss. He will give you the Dwemer Boots of Flying and has some interesting comments on the disappearance of the Dwemer.

Once you have the boots, there is a trick to getting the Corprus victims not to attack you on the way out. Uupse Fyr, who may be found near Yagrum, will tell you that she can calm the victims with soothing drum rhythms if you find and bring her a guarskin drum which the inmates are prone to walk off with. Any guarskin drum will do, but unless you happen to have brought one with you you'll need to find the one in the Corprusarium. Return it to Uupse, and you will be able to leave the Corprusarium unmolested. Alternatively, you can use the same tactics you used on the way in to return straight to the Corprusarium entrance.

Return to Divayth, give him the boots, and accept the potion.

It turns out that the potion doesn't actually cure you, but just removes the negative effects of the disease. Therefore, you have the complete disease resistance that Corprus gives, but no loss of attributes. Note that most of the 1000 gold Caius gave you wasn't needed (depending on how you got to Tel Fyr), meaning you're a bit richer too. You can now return to Caius in Balmora for the next stage of the main quest.

If you return to Fyr at a later point in the game, he will tell you that the potion doesn't seem to work on the rest of his cases and that he killed two of his most desperate patients while testing it. Apparently you are an exceptional case, though as you may have found out, the Nerevarine is supposedly protected from death by prophecy.