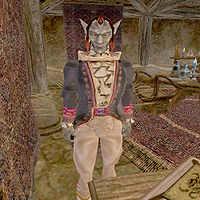 Dranas Sarathram is a Dark Elf merchant and slaver located in the Suran Slave Market. He might be able to help you with a lost slave.

He wears an extravagant shirt with shoes and pants. He carries the holding cell key, which unlocks all slave bracers in Suran. Aside from his natural resistance to fire and the sanctuary provided by his ancestors, he knows no spells.