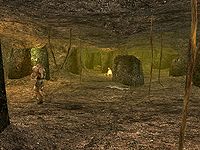 The Corprusarium is a series of caverns beneath Tel Fyr.

The caverns are guarded by Warden Vistha-Kai, but you are free to explore the whole area. However, you must not attack or kill the inhabitants, i.e. the diseased, if you don't want to anger Divayth Fyr.

The Corprusarium contains a number of locked (lvl. 100) and trapped chests. Each of them contains some loot and a key which opens another one of the chests.

Most of the chests contain minor miscellaneous Dwemer items. The real treasure is found at the end of the sequence. The Lockbox in Divayth Fyr's room contains the Daedric Sanctuary Amulet, which allows you to obtain the unique Daedric Crescent, and the final chest in the Corprusarium Bowels contains the artifact Volendrung.

If you are having trouble dealing with the corprus monsters, who will chase you around and attack you as you go between the chests in the outer Corprusarium, find the Guarskin Drum on the eastern path and bring it to Uupse Fyr. This will calm the monsters and render them non-hostile. Note you must have at least gotten to the Corprus cure part of the main quest before she will play it for you.