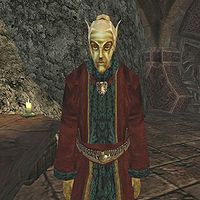 Carecalmo is a High Elf mage and a worshipper of Mehrunes Dagon who is helping the Dark Brotherhood from his base in Ashalmimilkala. He is accompanied by his bodyguard Meryaran. Depending on his Disposition, you can talk to him, though ultimately it will come to a fight.

He wears an expensive robe, amulet, ring, and shoes, and the Belt of Sanguine Martial Craft, and he carries a leveled amulet and leveled potion. Aside from his natural weaknesses to fire, frost, shock and magicka, his natural bonus to magicka, and resistance to disease, he knows the following spells: Crushing Burden, Wizard Rend, Reflect, Shockbite, Potent Poison, Frost Bolt, Five Fingers of Pain, and Flamebolt.

"YOU offer ME an ultimatum? No servant of Mephala can command me!" Goodbye.