This article is about the Sixth House base along the Bitter Coast. For the cave in the Sheogorad region, see Assumanu. 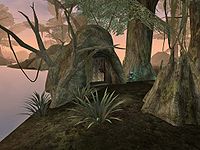 Assemanu is a Sixth House cave on a small island west of Vivec's Hlaalu Canton. 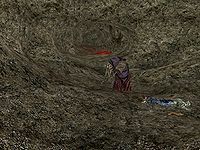 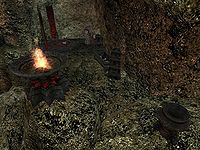 Assemanu is home to a large branch of the sinister Sixth House, led by a named Ascended Sleeper called Dagoth Hlevul, which is influencing people in Vivec, Suran, and as far away as the Arano Plantation.

Also in this cave is the Robe of St. Roris, which you may be asked to recover as part of a high-level House Hlaalu quest. The cave is quite dark and has ledges and bridges, levitation and some form of light is helpful here. The doors to the shrine are locked (35-75 pts.), however an Old Key to open them is found on a dead Ordinator. Be careful if you enter the Inner Shrine area through the middle door, four Dreamers will rush you.

The Inner Shrine is locked from the inside, it requires a key to open the doors - and the key is on the body of a dead Ordinator in the cave entry area, up a ramp in the north end. To get around this trap, use a Recall, Almsivi or Divine Intervention to get out of the central shrine. The Robe of St. Roris is in a hard-to-reach locked chest above the bells that may require levitation or extreme Acrobatics skills to get to. It's a useful item to get even if you don't have the above quest. A Rusty Key found on a dreamer here opens the chest. The place is pretty light on treasure otherwise, although a fair amount of Indoril armor - useful quality and sells for a lot of gold - can be found on the three dead Ordinators in the outer cave. Of course, there's the usual Sixth House Bell Hammer, as well as twelve ash statues, and Dagoth Hlevul has his own Sixth House Amulet.

Dagoth Hlevul, an Ascended Sleeper, is located here. Killing him will awake five Sleepers in Vivec, one in Suran, and one in the Arano Plantation. 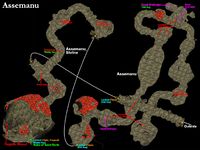