This article is about the cave in the Sheogorad region. For the Sixth House base along the Bitter Coast, see Assemanu. 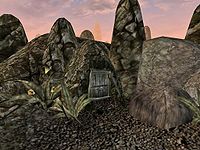 Assumanu is home to four NPCs, two of whom are hostile. The non-hostile mage is the rogue Telvanni Varona Nelas, who interferes with the love life of Ilmeni Dren, daughter of Duke Vedam Dren of Ebonheart. She possesses a token of Ilmeni's affections (an Expensive Glove, originally given to a Buoyant Armiger), which Ilmeni fears being blackmailed with, enough to hire the Imperial Legion to recover it. Nelas may realize that she is out of her depth here, and can sometimes be persuaded to hand over the glove. The alternative is, of course, her death.

Also present in the cave are a couple of Atronachs. 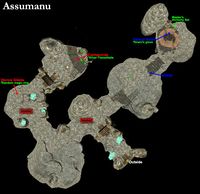