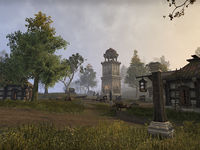 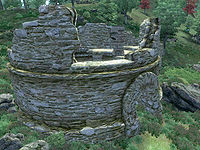 The ruins of Fort Vlastarus circa 3E 433

Vlastarus was a settlement located in the Greenmead region of Cyrodiil's West Weald, along the Gold Road east of Skingrad. The town was built around a lone and ancient Imperial watchtower called the Eye of the Greenmead, which was built long before the town was ever founded. The tower was once located at the southern edge of the town.[1]

During the Three Banners War of 2E 582, Vlastarus was a bustling town. It was largely untouched by the war, attracting refugees from all over Cyrodiil. However, the town was threatened by an increase in the number of undead, Daedra, and bandits in the surrounding countryside, and the nearby ruins of Vlastarus Towers were occupied by a bandit gang known as the Gray Vipers led by a hag named Fegra. Vlastarus was initially located within the territory held by the Aldmeri Dominion, although the town and the nearby Castle Brindle changed hands many times over the course of the war.[2]

The Imperial Legion later built a fort at Vlastarus, but it was abandoned by the Legion during the relatively peaceful Third Era.[3] By 3E 433, nothing remained of the town other than the vampire-infested ruins of Fort Vlastarus.[4] At around this time, the fort contained one of the last samples of Shadowbanish Wine.[5]