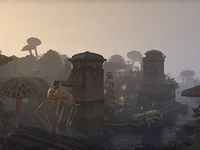 Suran was a medium-sized town situated on the eastern coast of Lake Masobi, within the Ascadian Isles. The town was constructed by the Hlaalu Construction Syndic in the mid-Second Era, having been contracted by House Redoran;[1] although some sources indicate that the original settlement had been built long before then.[2] Its architecture resembled a typical Hlaalu market town, complete with a watchtower and a small temple. House Redoran originally controlled the town, but it was later taken over by House Hlaalu.[1][3] During the late Third Era it served as the northern headquarters for Hlaalu slavers doing business with nearby plantations. Suran also functioned as a stopover for pilgrims and adventurers heading northeast into the Molag Amur region and Mount Kand.[3]