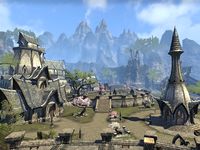 Ayleid ruins beneath the city 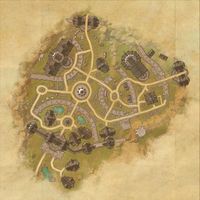 Marbruk (or Marbruk Field) is a city located deep in the forests of Valenwood, in eastern Greenshade, north of Greenheart and west of Elden Root. It connects the wild interior of the region with Grahtwood.[1]

Following the Alessian Slave Rebellion in Cyrodiil, an Ayleid clan settled on the site of Marbruk in the early First Era.[2] Like all Ayleid settlements in Valenwood, the clan was eventually absorbed into mainstream Bosmer culture and the site fell into ruins. The name of the clan and its city is lost to history.[3][4] However, the remains of the Ayleid city remained underground.[2]

The land that Marbruk was built upon originally belonged to the Bosmer Driladan Clan, once native to the area.[1] Marbruk was constructed after the incorporation of Valenwood by the Aldmeri Dominion in 2E 580 to defend Greenshade from the Ebonheart Pact. Hoping to accommodate their Altmer allies, the Bosmer ignored the felling of trees involved in its construction. The Altmer, in turn, attempted to respect the Green Pact by importing the wood and stone required from outside of Valenwood, and faced little opposition from the local tribes.[5][6] The city featured modern Altmeri architecture built atop the original Ayleid ruins, which hosted the criminals and smugglers.[2] Besides of its military role in defending Greenshade from invaders, Marbruk was built as an example and a symbol of what the Dominion should be and how united it was, regardless of race and origin. However, many accused the Altmer of intending to "civilize" with their presence the "wild" Valenwood and its inhabitants, even banning Bosmer ancient traditions and customs like smoking dried insects, walking without shoes, or the Rite of Theft. All of this under an important presence of Thalmor agents in the city, who enforced these new laws.[7][8] From their headquarters in Marbruk, the Thalmor were also responsible for the suppression of Hircine's worship among some local Bosmer, although partially unsuccessfully.[9] The new city was also home to a secure vault, below its Mages Guild's Hall, where the Dominion stored some of its most priceless treasures: a small greenhouse with four rare plants, including Crimson Nirnroot; a Relic Room which held Ayleid relics, including the Crown of Nenalata, recovered from a Bosmer thief who was apparently practicing the Rite of Theft, and traded it back to the Dominion for a song, confounding the Altmer; and the Staff of Magnus, then into the possession of the Dominion.[10] In 2E 582, shortly after the city's construction, the Staff of Magnus was stolen from the vault by the Veiled Heritance. The Heritance then resurrected Prince Naemon as a lich and bestowed the Staff upon him. It was this shade that raised an army of undead in the Green's Marrow region and led an attack on Marbruk from the north. The undead forced the Driladan Clan to migrate south, but the Dominion managed to hold Marbruk against the initial assault and eventually destroyed Naemon and his army with the Vestige support, who retrieved the stolen magic artifact to the secured vaults under Marbruk. The settlement remained in Aldmeri hands until the eventual dissolution of the Dominion.[1]

In 2E 830, the city was again annexed by the Second Aldmeri Dominion after the intervention of Summerset in another Camoran civil war.[11] However, the catastrophic use of the Numidium by Tiber Septim resulted in the conquest of both the entirely of Valenwood and the Summerset Isles in 2E 896, ending the Second Aldmeri Dominion control of the settlement, which was incorporated to the Third Empire.[12]

During the Third Era, the city remained in Empire hands except for the Camoran Usurper Rebellion between 3E 249 and 3E 267.[13][14] The once proud city, was reduced to a small settlement named Marbruk Field by the time of the Imperial Simulacrum, being ruled by Lord Palinis. It had a rivalry with Glenpoint.[15] It was neighbored by several settlements, including Glenpoint in the northwest, Greenheart in the southeast, and Longhaven in the west.[16] The Oblivion Crisis that ended the Third Era and weakened the Empire provided the opportunity for the Thalmor to seized the Summerset Isles. In 4E 29, a Thalmor-backed coup overthrew Valenwood's government, routing Imperial forces and their Bosmer supporters. Alinor and Valenwood then proclaimed a union, and a new Aldmeri Dominion was formed. The village fell into Aldmeri hands for the third time in history.[17]

Ironically, during the construction of Marbruk in the Second Era, it was reportedly the relatively "civilized" Bosmer living in cites like Woodhearth who voiced the greatest opposition to the destruction of Valenwood foliage. The Green Pact Bosmer, meanwhile, showed more fascination than anything else.[1][6]