The UESPWiki – Your source for The Elder Scrolls since 1995
< Lore: Places: L
Jump to: navigation, search 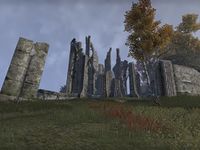 Lindai is an Ayleid ruin located far to the east of Chorrol, deep in the Great Forest of Cyrodiil.[1]

During the time of the Ayleids, Lindai was an independent city-state and a fierce rival of Nenalata. The infamous Heretic of Lindai was from the city, and was seemingly a worshipper of Auri-El.[2] Following the Alessian Slave Rebellion, Lindai was abandoned and fell into ruin. Along with the Crown of Lindai, the last king of Lindai was entombed in the royal burial chamber, which was then sealed.

During the Alliance War of 2E 582, a squad of Daggerfall Covenant soldiers based in Fort Glademist were ordered to clear the nearby Ayleid ruins, including Lindai, in search of enemy troops.[3] However, Lindai had been taken over by a cell of Shadowed Path cultists, who began raising the dead. Their efforts culminated in the creation of a lich to lead the cult, although it was destroyed by a passing soldier on behalf of Weynon Priory before it could leave Lindai. The priests at Weynon henceforth kept a close eye on the ruins to prevent any further necromantic activity.[4]

Circa 3E 433, an Imperial scholar of the Ayleids named Herminia Cinna came into possession of a key which would unseal the royal burial chambers. When Umbacano, an Altmer collector of Ayleid antiquities, sent the Champion of Cyrodiil to buy the Crown of Nenalata from her, Cinna suggested that the Champion use the key to recover the Crown of Lindai instead. Cinna rightly feared Umbacano's ulterior motives, as he planned to use the Crown of Nenalata to restore the power of Ayleid civilization in Cyrodiil by proclaiming himself king in the throne room of Nenalata. Although Umbacano would be unable to distinguish between the two crowns, the magical enchantments in Nenalata's throne room would destroy anyone who would proclaim himself king while wearing the crown of their rivals. It is unknown which crown Umbacano was given before his fatal expedition to Nenalata, or indeed whether or not the Champion entered the undead-infested ruins of Lindai at all.[5]