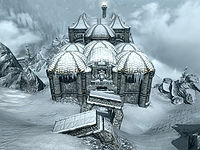 Kagrenzel (translated as "Music City" in Dwemeris)[1][2] is a small dwarven ruin found in the Velothi Mountains in the province of Skyrim. It is found in the region of Eastmarch. Kagrenzel was a small holdout that is shrouded in mystery, as it is filled with pit falls and various red herrings. It was meant to hold some sort of secret.[3] A vast pitfall leads into a giant chasm, which flows into Stony Creek Cave.[4] At one point, the stronghold contained the left side of the Wrathstone.

Amidst the Aetherian Wars, sometime in the First Era, the ruins of Kagrenzel contained the left side of the Wrathstone, an ancient tablet. During a raid on the city-state of Mzulft, conducted by the Ayleids, the Dwemer architect, Mhuvnak had left for Kagrenzel, seeking refuge from the attack, all the while, recovering the Wrathstone. When the traps in Kagrenzel proved to be insufficient to hold half of the tablet, Mhuvnak would travel across Eastmarch and establish his stronghold, the Vault of Mhuvnak.[3] Here the tablet would be stored for many years, even following the Dwemer's extinction.[5]

By 4E 201, the ruins of Kagrenzel were still present. Many adventurers would come to Kagrenzel, only to succumb to its many traps.[6] The nearby Stony Creek Cave was known to contain a number of artifacts during this time, such as Finn's Lute (the very first eight course lute ever created), Ruin's Edge, and a Stone of Barenziah. The Forgotten Hero would journey to the connected Stony Creek Cave during the Stormcloak Rebellion to retrieve Sotha Sil's replica of Sunder.[7]