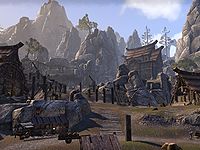 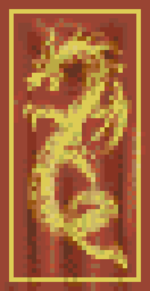 Banner of Dragonstar circa 3E 397

Dragonstar is a city-state in Hammerfell, just south of the border with High Rock and Skyrim. It is located on the foothills of the Dragontail Mountains, in the region of Craglorn. Like much of Craglorn, Dragonstar is very cosmopolitan compared to the rest of Hammerfell, often inhabited by those deemed "unfit" for life in the Empire.[1]

In the Second Era, it was a small, fortified settlement dominated by Nord miners and mercenaries. The Dragonstar Caravan Company began operations there, but later moved its headquarters to Ska'vyn. In 2E 582 the local miners were contracted with extracting fast amounts of nirncrux, known as "red brittle" to the locals. Although abundant and seemingly inert, the stone is very dangerous to mine due to the toxic fumes released. The patron of this operation was Cassipia, who aided and later betrayed the dangerous Scaled Court. Nirncrux mining presumably halted following her death and the destruction of the Court. The entrance to an otherworldly arena also appeared in the mountains north of the settlement that year.[2]

By the time of the Imperial Simulacrum in the late Third Era, the city-state of Dragonstar was an active settlement, being known as the "home of the Sacred Rage." It was ruled by King Dhatan, and it had a rivalry with Elinhir and Skaven.[3] It was neighbored by several settlements, including Dragon Gate to the southeast, Heldorn Mount to the southwest, and High Rock to the north, towards Raven Spring.[4][5]

During the War of Bend'r-mahk, the forces of Skyrim advanced into Hammerfell and besieged the city, eventually establishing a separate government within the city. During this time, the city was divided into western and eastern sections, walled off from each other, each with their own government. Dragonstar West was still under the control of Hammerfell, while Dragonstar East was controlled by Skyrim. An atmosphere of deep mutual distrust prevailed between the two sides. The city had an arena pit, a prison and guild halls for the Mages Guild, Fighters Guild and Thieves Guild. Shadow Gates could also be found in the city.[6]

The occupation persisted after the end of the war, and by 3E 432 the situation remained unchanged.[7]