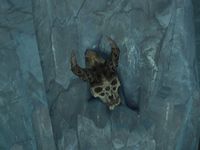 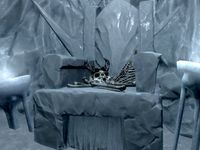 Karstaag's skull placed on his throne

The Glacial Cave is very simple, containing only three Rieklings. Karstaag's skull is in the wall at the very back of the cave with torches around it.

After traveling to the ruins of Castle Karstaag, there are two ways to reach the courtyard: You can either pick the master-level lock on the front gate, or take the long route through the Castle Karstaag Caverns, a large Riekling cave. The cave crisscrosses the main cavern multiple times and there are Rieklings on every level.

Once you get to the courtyard, you will see a large throne. Place the skull here. Be prepared for a very difficult fight. Once you place the skull, back up. Karstaag will appear as a ghostly frost giant with horns and a permanent ice cloak. When he appears he will cause a massive explosion of ice that looks like a blizzard which will hang around a while and take up a large area. Karstaag fights like a regular giant but hits a lot harder. He can summon three ice wraiths at any time in the fight and he can do it multiple times. He is a very powerful foe and can kill poorly-equipped characters rapidly.

When you defeat Karstaag, you will gain the power to Summon Karstaag, but only three times and only outside. You can also loot Karstaag for ten samples of ectoplasm and a few soul gems.

This Skyrim-related article is a stub. You can help by expanding it.
Retrieved from "https://en.uesp.net/w/index.php?title=Skyrim:Summoning_Karstaag&oldid=2382894"