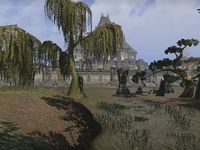 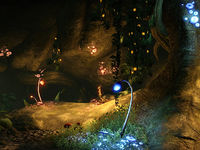 Bloodmayne is a forested area found in the Nibenay Valley. It is specifically located on the northside of the Larsius River, but specifically between Bravil and Anutwyll to the southeast and Wenyandawik to the northwest. It lends its name to a cavern on the riverbed called Bloodmayne Cave, but in the Interregnum, it was also used for the historical Castle Bloodmayne, which sat in the dead center of the area, in the middle of a shallow marsh, surrounded by willow trees.

The Bloodmayne Cave is known to host a wide variety of creatures from the nearby province of Valenwood, such as stranglers and spriggans, even the fire-breathing shalk. These creatures tend to spill over into the wealds of Colovia and congregate in natural caverns and groves such as Bloodmayne.[1] These caves were largely untouched, even during the war-torn period in the Second Era, when the Alliance War laid waste across central Cyrodiil. Among the abundance of creatures, one of the strongest was a special spriggan called Acanthia, the Chosen of Nirn. Whatever significance this title has is unknown. During the Oblivion Crisis in 3E 433, there was a prison escape in Bravil and the fugitives took residence in Bloodmayne Cave. Burz gro-Khash, Guardian of the Fighters Guild in Cheydinhal sent a warder to deal with the threat, who came back successfully.[2]

When the Alliance War took place in Cyrodiil, a large stronghold called Castle Bloodmayne sat at the top of the hill, above the river valley and northwest of Bravil. It was located in the general territory occupied by the Aldmeri Dominion and it lies on the Green Road. It came equipped with the usual amenities that these strongholds have, such as a lumbermill, a quarry, and a farmstead. Control over Castle Bloodmayne has wavered between the Aldmeri Dominion and the other alliances, the Daggerfall Covenant and the Ebonheart Pact, but the exact timeline in which they held control is imprecise.[3] At some point later, Castle Bloodmayne was torn down and there was nothing left by the late Third Era.