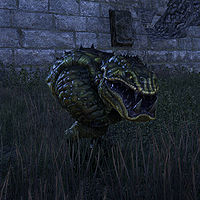 The Alit is a tailless, two-legged omnivore that can be found in Morrowind, Black Marsh, and Elsweyr. They can also be found in Valenwood, though they are not native to the region. Animal enthusiasts from Valenwood used to import the creatures. A good deal of them escaped captivity, and now alits roam the southwestern forests.[1] They are related to guar, kagouti, and wormmouth.[1][2]

Built like the kagouti, the Alit has a large head and protruding jaw, and when running on its short, stumpy legs, it looks like a big toothy mouth with feet. Their meat is tough and gamey. They are solitary creatures, and prefer easy prey such as sheep.[3] Like guar, they supplement their nutrition by rooting.[1] They attack by biting and can jump deceptively high.[3] Alits are known to carry ataxia.[4] Alits have tough skin and chewy meat.[5]