In the Greathall, speak to Tharsten Heart-Fang, who congratulates you on proving your wisdom and loyalty but still asks that you prove your strength to the Skaal (see bugs). You are to meet with the Shaman Korst Wind-Eye on the Northern shore of Lake Fjalding. Head South from the village to find and meet up with Korst.

Korst is actually on the north end of the eastern shore. As you approach you should notice a giant fire rising from the center of the lake. Speak to Korst, who explains the strange disturbance on the lake. Apparently, Heart-Fang believes it was caused by a Draugr Lord, Aesliip, who lives underneath the lake. Korst is less certain, and believes it is a sign of the Bloodmoon Prophecy. Regardless, you are tasked with investigating the matter, taking care of Aesliip if required. Find a convenient hole in the ice to drop in and swim to the center of the lake to find the Caves of Fjalding at the bottom.

Fortunately, the cave is not underwater itself so no form of Water Breathing is required. You'll encounter the regular forms of undead such as bonewolves and draugr which you've seen before. Continue on until you find the entrance to Aesliip's Lair, partially hidden in a small tunnel. 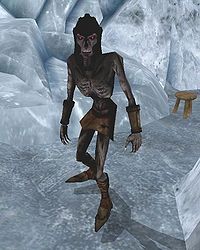 As you explore about you'll find an area habited by the Draugr Lord who will speak to you as you draw near. He will tell you the story of how he was once a mage who became draugr solely so that he could continue to support a barrier that prevents the invasion of Frost Daedra. The barrier has recently become weak and he asks for your help in driving back the daedra invaders. You can either choose to help or choose to attack Aesliip in hopes that he is merely deceiving you.

If you choose to help the Draugr Lord, he will follow you to the caverns just beyond where you first meet him. There are 10 Dire Frost Atronachs throughout the caverns; you shouldn't have too many problems taking them out with the help of Aesliip. Once the last atronach is dead, Aesliip will speak to you once again, thanking you for your help and giving you his ring, and then die.

If you refuse to help Aesliip, he will attack you (his corpse will have the same ring that he would have given you). You can still kill all the atronachs, but you will not receive any journal entry about them when you are finished. It seems that Korst doesn't care which route you take.

Return and speak to Korst along the shore of the lake who will congratulate you for taking care of Aesliip in the manner that you did. He will tell you to meet him later in the Skaal Village.