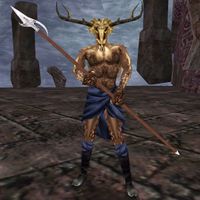 Hircine is a Daedric Prince and the main antagonist of the Bloodmoon expansion. He is responsible for the Hunter's Game that occurs near the end of the Bloodmoon Prophecy. After you pass his challenges and reach him in Mortrag Glacier's Huntsman's Hall during Hircine's Hunt, you will face him yourself. As he considers fighting you at his full power unsporting, he allows you to choose choose one of three of his aspects to fight, which represent his Guile, Speed, and Strength.

Hircine's Aspect of Guile is easily the most resistant of the three. Fast and highly elusive, he poses quite a challenge, jumping out of range when hit. His Hunter's Venom focuses on disabling, with Paralyze and Burden, and his melee attacks with the Spear of the Hunter hit hard.