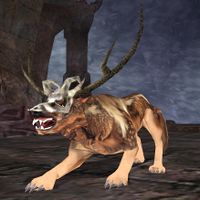 Hircine is a Daedric Prince and the main antagonist of the Bloodmoon expansion. He is responsible for the Hunter's Game that occurs near the end of the Bloodmoon Prophecy. After you pass his challenges and reach him in Mortrag Glacier's Huntsman's Hall during Hircine's Hunt, you will face him yourself. As he considers fighting you at his full power unsporting, he allows you to choose choose one of three of his aspects to fight, which represent his Guile, Speed, and Strength.

Although Hircine's Aspect of Speed is weaker in attack than its alternatives, it makes up for this with astonishing speed (100) and agility (140), as well as a luck of 140. This means that it is very difficult to get a blow on target, and even more difficult to make it count. The fact that this aspect constantly regenerates health and fatigue makes it an even more deadly opponent.