Necromancers are an enemy group in Blades that are hostile to the player. Necromancers, like all human enemies, are weak to poison damage. They resist fire and frost damage. Necromancers use an enchanted dagger that deals slashing and frost damage. Although they have no shield with them, they can use the dagger to poorly block attacks. Besides their dagger, they also use their magicka to mainly cast frost based spells to aid them in combat. 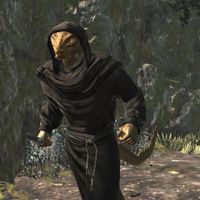 When the room with the lever is entered:

When the room with the necromancers is entered:

Once the summoned skeleton is killed the first necromancer can be talked to:

Neither should you.
"What would you know? You're one of them!"

Who's them?
"I don't need to explain myself to you! Leave before I curse you!"

I'll go if you tell me what you're doing.
"I'm… we are teaching a lesson to the people of this wretched kingdom."

What's anyone going to learn from this?
"Master was right. No one will understand… That's why you have to die!"

I'll leave. Just talk to me. Who are you?
"I'm just a necromancer. What do you care?"

You had friends once. Family.
"So what? No one cares about me…"

Everyone has people who care.
"My… my mother… she's not well… because of people like you!"

You really want to become a killer, like me?
"I don't know what I want… I thought I could get justice if I just made everyone afraid, but this… this ritual…
I can't do it anymore. Please… go stop him."

If spoken to again if he didn't attack you:

"If the ritual is completed… I don't want to think about it."

In the final room of the keep, the second necromancer who is a Dunmer will talk to you:

"Damn it! Useless peasant! I have to do everything myself…"

What's the ritual for?
"As if I would tell you! But when it's finished, this kingdom won't soon forget…"

No one needs to get hurt.
"Wait... I've heard of you. You're the lackey of that bear-pig wench on the throne.
Let's see if you're as strong as they say you are!"

Your friend told me to stop you.
"What? You spoke to him… Your words won't work on me, you cretin!"

After you kill the second necromancer, you can optionally return to the first one to speak to him:

"What happened? Is it over?"