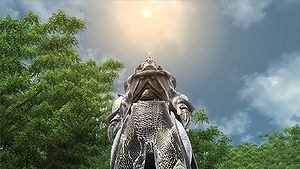 My characters in Oblivion tend to be followers of the blade, but due to my fascination with esoteric arts and knowledge, I cannot help but assign at least four skills to magical schools. My favourite city in Cyrodiil is Leyawiin, but I do not reside their as the property is of objectionable stature and questionable hygiene. This is a source of annoyance, as I enjoy the city's flamboyant architecture and intricate stone interiors. I have completed every quest in the game at least once, and have read every book. My playthroughs of the opening section are legion, but recently I installed the Alternative Start mod, thus relieving me of the necessity of bearing multitudinous witness to the Emperor's (frankly poorly contrived) demise.

I have, for most of my life, entertained a passionate affection for my mother language, and have achieved a level of familiarity that is rarely to be seen. I draw my inspiration in this regard from Lord Thomas Babington Macaulay, the relics of whose eloquence and genius are some of the English-speaking world's brightest ornaments.

My screenshots can be found Here.

MY favourite locations in CyrodiilEdit

My second favourite city in Cyrodiil. Cobbled streets interspersed with beautiful stone buildings, intrepid forays into the basement of The Oak and Crosier and the great oak tree in the central plaza are all quintessential to Chorrol. My house in chorrol is littered with pieces of paper collected during my travels. A lone Frost Atronarch guards the entrance and in the dining room a feast of human hearts is kept prepared at all times.

I love the air of class division afforded to the town by the presence of the many vulgar sailors and pirates, living and otherwise, but I must express displeasure at being unable to avail of Mirabelle's other services, the process of speaking with her is disappointing at best. My home in Anvil is rumoured to contain a secret underground chamber, wherein resides an artifact of unspeakable power.

It is observed that castles are conducive to fanciful delusions and excess. Thus my attraction.

I am principally concerned with the quality of images and language on the wiki. ---TheEnigmaticMan Wouldst thou speak? • Mine handiwork 23:03, 1 September 2010 (UTC)