Featured images follow the same nomination process as for Featured Articles, but as they appear in a different section of the main page, a separate series of votes is held to decide which images meet the required standard.

For an image to be eligible for Featured status, it must be used in a UESP article. This is to prevent specially-taken beauty shots from stealing the limelight.

Any registered member can nominate any image at any time. Nominated images should be of high quality and meet the site's image standards.

To nominate an image, list it on the bottom of this page with a three-tier heading, (===Example===), and briefly explain why you think the image should be given featured status.

After an image has been nominated, any registered member can vote to support or oppose each nomination. Each member can only vote once for a given image, but a member may change his/her vote by striking out the original vote and replacing it with the revised vote.

Commenting with your vote is optional, but if you oppose a nomination, please state how the image must be improved to get your support for featured status.

If you are not yet ready to vote but would still like to add your thoughts, you may use:

And fill in your concerns or questions.

UESP Administrators will periodically make decisions on image nominations. Decisions will only be made if:

Nominations not meeting these criteria will be left open until a decision can be reached.

Images whose nominations pass will receive featured image status on the front page for two weeks (which may be extended up to one month if there is a shortage of images), and receive a small bronze star (

) on the top right corner. If an image achieves featured status before the present featured image's time expires, it must wait its turn. 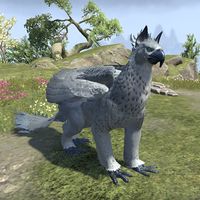 Look at this lady. Ears perked up, head cocked slightly to the side. She's judging you.

This is a nice cinematic shot. It's pretty high res, the subject takes up plenty of screen real estate and he casts a lovely shadow that shows how imposing he is.

High resolution, great lighting with perfect highlights/contrast. Background neither busy nor boring. It would be great to have a Blades image featured, and this gets almost the most possible out of a Blades screenshot. 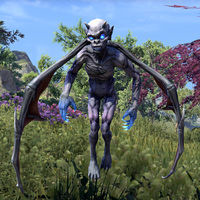 This image has wonderful lighting, and the subject takes up most of the shot.

Previously nominated by Tib about 4 years ago, it didn't pass due to the lighting and it being hard to make out what it depicts. I have replaced the old screenshot previously taken Vordur, and replaced it with my own. I took advantage of the newer image standards to fit in more of the figure, and took it in clear lighting. I will quote Tib on the significance of the carved cliffs.

"A window to the past of Stonefalls... This statue tells a story of two brothers and their ultimate sacrifice to save their home in the face of war. Brothers of Strife is an interesting bit of lore and, in my opinion, one of the things you definitely take with you when you leave the Stonefalls area in ESO. Again, this is such a great FI material. As above, if there is something you think could be improved, share your thoughts!"

And there you have it. 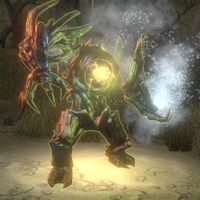 A difficult shot with no UI elements, featuring a boss from ESO's new solo Arena in the midst of casting an ability. 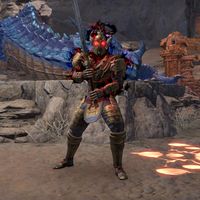 What a wonderful image! It's so expressive, despite the subject being a many-eyed (most of which don't have lids), tentacled monster. The entire beast is in-frame, the lighting works, and the colors are similar without making it too difficult to see the subject.

I find this image to be very impressive, I love the way the screen shot was took where he is holding his sword.