Miserable, horrid creatures. They're vile and viscious. They vary in size from smaller than a Bosmer to larger than a Nord. Some are mindless animals; others have learned the ways of magic. You'll often see them with trained Durzogs, another filthy creature. - Fedris Hler 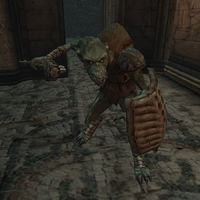 Description: The small type of goblin, with typical yellowish eyes and a hunched back, looks kind of fragile, but their crude weapons make them quite hard-hitting enemies. They often come in numbers.
Quote: A guard in Mournhold: "Little vermin. I'd love to get my hands on some of their scrawny little necks. The people have been making a stink about seeing some around the city recently, especially in the Godsreach area. I'll keep my eyes out for them."
Found: Mournhold sewers.
Drops: Goblin Shield, Restore Health Potion, Random Goblin Weapon, Random Bandit Loot.
Resistant against: Fire.
Disease: - 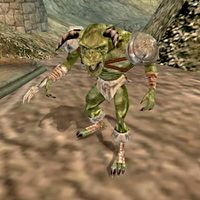 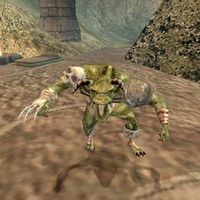 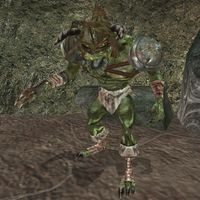 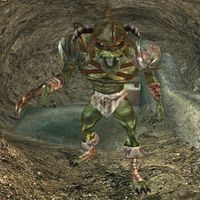 Description: The high-ranking warchiefs are powerful warriors, impressive in sight and ruthless in battle. They cast powerful combat magic and should be treated with caution.
Quote: -
Found: Old Mournhold: Tears of Amun-Shae.
Drops: goblin_health
Resistant against: normal Weapons.
Disease: -