You meet with Fedris Hler in the Temple Reception, following directions by any guard, after killing the leader of the Dark Brotherhood. Though you still don't know why you were targeted by the Brotherhood, Hler will ask you to help track down a Goblin army supposedly being prepared by King Hlaalu Helseth, the newly crowned King of Morrowind. You must kill the two Goblin Warchiefs, and two High Elf trainers if possible, and return to Hler.

Hler suggested asking around town about the Goblins, so do just that. It shouldn't take too long, or too many gold pieces, to learn of rumors about some creatures in the sewers of Godsreach. The Godsreach district can be reached via the door in the southwest side of the Temple district. The Sewers can be entered through a trapdoor (labeled as the Old Mournhold: Residential Sewers) in the northwest corner of Godsreach. The approximate difficulty of Goblin variants in increasing order is:

The Goblins are armed with hard-hitting, yet brittle weapons and may use Restore Health potions when hit. 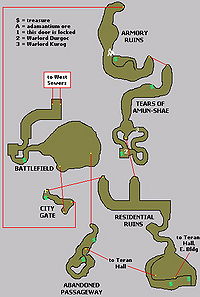 The area you have to explore in order to find the two Warchiefs and High Elves is all underground in an expansive labyrinth of sewers and caves. There are 9 sections involved:

Several areas can be reached from multiple paths so you don't necessarily need to explore all of the above, though there is no harm in doing so. The areas have a good number of various Goblins and those Durzogs which you must face. Many of the Goblins will use Restore Health magic which makes fights all the more interesting. Many of the creatures will respawn if you return later, so the safest bet is to completely clear an area before continuing on. Also as a warning, watch out for the invisible pit trap in Teran Hall, an interesting addition even if it does kill you.

You can reach the Tears of Amun-Shae via the Residential Ruins or the Armory Ruins. Warchief Durgoc is located in the southern portion of the Old Mournhold: Tears of Amun-Shae section of the expansive dungeon. Close by, Warchief Kurog is wandering the tunnels. Durgoc carries a key which opens a locked (80) chest next to his location containing 622 gold and a unique Goblin Buckler. There is a good hoard of loot in the waterfall area (including an Adamantium Axe), reached only by levitation.

The two High Elf trainers, Yarnar and Armion, can be found in the bottom of Teran Hall, East Building in the Residential Ruins area. Alternatively, you can reach the area from the bottom of Teran Hall, behind a 100 pt. lock. They are relatively close together, but you might want to separate them in order to fight them one-on-one. They can be a handful if they attack you together.

Report back to Hler in the Temple: Reception area. If you killed both Warchiefs and both High Elf trainers you will receive a whopping 15,000 gold as your reward. If you killed both warlords but only one trainer, Fedris Hler will comment "Shame you didn't get the other one" and reward you with 10,000 gold. If you only killed the Warchiefs, the reward will be even less, a meager 5,000 gold. Speak to Hler again and offer to be of further service to our Lady and you'll be directed to Gavas Drin, the Lord Archcanon, in his office here at the Temple.