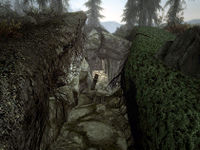 Vahlok's Tomb is a Nordic ruin located south of Skaal Village. It is the tomb of Vahlok the Jailor, a dragon priest. 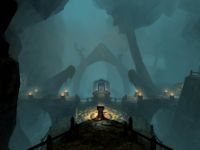 The main chamber of the tomb

From the entry door, a passage leads south, downhill and down steps, then turns west and opens into a large room. A further set of steps leads west, to a platform with a pedestal on the west end, containing an etched tablet and a switch. During Lost Legacy, this switch is used to open two gates, one on the north side and one on the south side of this room.

There are steps down on both sides of the pedestal, to an area with a large trap door over a fire pit. There are steps up on both the south and north sides of the fire pit which lead to the two gates mentioned above. There are more steps up directly west of the fire pit, which lead up to a cage with another pedestal with tablet and switch. This cage is initially locked; during the quest, you must first go through both the north and south gates and defeat the enemies there to obtain the means to unlock it.

See the quest page for more on the rooms through the north gate. When you exit the north word-wall room through an upright sarcophagus, you will be in a twisting, rough-stone passage. At the end of that passage, a pull chain opens a stone door, putting you on a ledge. At this point, you can walk east and jump down from the east end of the ledge to a lower ledge, just opposite from the bottom of the stairs that lead up to the north gate; from here, you can return to the fire pit area. Alternatively, you can walk along the ledge until you are lined up with the large stone arch that crosses the room from north to south, and then jump south, down onto the arch. Turn around and you will see a chest to the northwest. After looting the chest, walk down the arch, jump down into the water, and swim east. Through a smaller archway is a long set of stairs that will take you back up to the fire pit level.

When you take the stairs up from the south side of the fire pit, there are two braziers on either side of the path just before you get to the south gate. Walk south past these, turn right (west), and you can jump on the stone pillar that angles up towards the ceiling. Walk up the pillar to find a coin purse near the top, then turn around and walk back down. See the quest page for more on the rooms through the south gate. The exit from the south word-wall room leads to another twisting rough-stone passage, but nothing interesting is available when it opens back into the fire-pit room; just walk east to get back onto the stone platform and return to the fire pit area.

Once you have the means to unlock the cage door west of the fire pit, the switch in the cage creates a glowing blue magical bridge that leads to a ledge on the west side of the room. Cross the bridge to the ledge, go down some steps, and proceed west into the first stone hallway. There is a wooden door on the south side of this hallway that is barred from the other side. At the west end of this hallway is a pedestal with a handle, and a potion on a candlestick just above it. Looking out the opening next to the pedestal, you will see that you are near the ceiling level of a large room, partially filled with water, and with waterfalls pouring out of the walls. There are also Corrupted Shades wandering around in the water at the bottom of the room; as you cross the bridges, you may sometimes see red "enemy" dots for them on your compass, but they will probably not engage you at this time.

The handle on the pedestal creates another magical bridge that crosses the room to a second stone hallway. At the west end of this hallway, there are a couple of burial urns, and another barred wooden door on the south. At the north end of this hallway is another pedestal and handle.

When you go back through the room with the three magical bridges, you can attempt to engage the Corrupted Shades, but you may be too far above them for some ranged weapons to have any effect. If you have enough health, you can jump down from the bridge into the water, taking a small health hit. Or, use Become Ethereal before jumping down. From the water level, you can engage the Corrupted Shades as you like. When you defeat them, they simply disappear, leaving no remains for you to loot.

From the water level, you can also see a few places along the walls where large chunks of stone have tumbled down into the water. There is nothing of interest in the niches higher on the wall where the stones used to be. A couple of these have harvestable white cap mushrooms just above the water line.

Also, from the water level, you will find three open doorways. Each one leads to a set of stairs, which takes you up to the bar side of one of the barred wooden doors encountered previously. There is no notable loot in any of these passages.