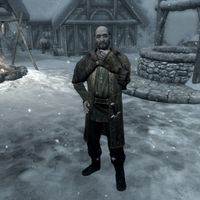 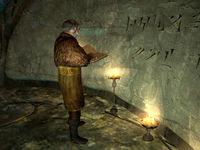 Tharstan is an elderly historian and author currently residing in Skaal Village on Solstheim. He wrote the book Children of the All-Maker and is currently working on the definitive history of the Skaal. He used to reside in Solitude.

He will spend most of his day wandering around Skaal Village and observing the daily activities of local people. At night, he will stay in the Greathall.

Tharstan wears a set of fine clothes and a pair of fine boots, and is equipped with an iron dagger. He carries a copy of his book, Children of the All-Maker, and a selection of common items and gold.

You may ask him various things about his identity and study. When you ask if he's one of the Skaal, he tells you, "Oh no, most certainly not. I'm here to learn about the history of Solstheim. Solstheim is a fascinating place, but we know so little about its past. There are many mysteries that remain unsolved." If you ask what he makes of the stone structure some of the village inhabitants were building, he responds, "Yes, that was a most disturbing experience. But to answer your question, the architecture was strange, almost otherworldly. Given that, and the considerable power it must have taken to affect our minds so completely, it would suggest the work of a powerful mage. Either that, or perhaps a daedra. If so, then may the nine protect us." Asking further about daedra will result in him explaining, "Powerful and malevolent entities who make their home on the plane of Oblivion. Some of the more powerful among them can exert their influence within our world, and when they do, men inevitably suffer." When questioned about how long he has been studying the Skaal, Tharstan answers, "Well, let me think... I suppose it's been nearly a year now. My goodness, how the time has flown!" When asked whether the Skaal mind being studied, he says, "Well, not so far. They think I'm a bit strange, but they seem to tolerate me. In fact, they've been very accommodating. Hospitable, even. They seem happy to talk about their traditions and history."

Fanari: "I have a favor to ask of you, Tharstan."
Tharstan: "Hm? What do you need?"
Fanari: "When you visit the ruins again, will you bring back some blue mountain flowers?"
Tharstan: "My dear chieftain, I will bring you back a whole bouquet if you wish."
Fanari: "I don't need so many, but thank you, Tharstan. You are as sweet as honey from the comb."

Tharstan: "Is it just me, or is it colder than usual today? By the Nine, I feel as if my bones have turned to ice."
Fanari: "And you want to put more logs on the fire?"
Tharstan: "Just a few."
Fanari: "Then take an axe and find a dead tree to cut. We keep only what we need in the village, you know that."
Tharstan: "I'm not setting foot out that door unless it's absolutely necessary. If I do that, I'll be even colder than I am now!"

Morwen: "How much longer will you stay in the village, Tharstan?"
Tharstan: "To tell the truth, Morwen, I thought it would only be a year or two. However, I have come to be very fond of the village and of all of you."
Morwen: "Then you should stay. What does the world beyond our lands have to offer that we do not?"
Tharstan: "It's hard to explain, but as much as I have come to think of Skaal Village as a second home, I do still miss Skyrim."
Morwen: "I understand. Know that you are welcome here for as long as you wish to be."
Tharstan: "I thank you, Morwen. It means very much to me to hear you say so."