After completing A False Front, report for duty again to Legate Rikke at the Pale Imperial Camp.

Having learned that the Stormcloak-held Fort Dunstad is in need of reinforcements, she will command you to help to take the fort while it is vulnerable. She will instruct you to rendezvous with a task force of Imperial soldiers who are staging near the fort, southeast of your location. She will mark the meeting point on your map, and you will update your journal to note this objective.

Join the Men Attacking the FortEdit 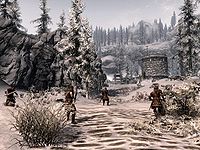 A group of legionnaires preparing to converge on the fort

As you approach the waiting soldiers, they will charge toward the fort. Your objective becomes to take it over from the rebels. As your team engages the Stormcloaks holding the fort, you will receive regular updates on the percentage of enemies remaining.

The entire battle will take place in the exterior areas of the fort.

If you have not yet developed an eye for distinguishing between Imperial friendlies and rebel enemies, the Stormcloaks are easily identified by their pointed helmets.

The battle will comprise multiple pairs and small clusters of engagements, with both sides using melee weapons and archery attacks. These engagements occur at multiple points in the two courtyard-like areas, and along the elevated wooden platforms around the semi-perimeter.

If you let them, your group will essentially take care of the battle for you. If you hang back and take the most passive approach to the fight, you may need only to restore your health once or twice when you are targeted. If you want to prioritize acquiring weapons and armor off of fallen soldiers, you should search them quickly because their bodies will disappear shortly after falling.

When it's reported that all the rebels have been killed, you will have completed the objective of taking the fort.

Often, there are actually one or two Stormcloaks remaining (or respawning) after the battle has been formally won, which you can engage and loot. Also, if you so wish, you may kill the remaining Imperials as well in order to loot them without getting a bounty.

Your objective then becomes to report to General Tullius at Castle Dour to receive your reward, but doing so technically occurs under the overarching Reunification of Skyrim quest. After you have taken the fort, The Battle for Fort Dunstad will clear from your journal.

While General Tullius will say he is giving you a blade, you will actually receive a leveled shield as a reward. You will also be promoted to Praefect of the Imperial Legion.