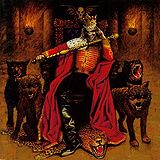 Eddie the head was born without any arms, legs or a body all he had was a head. But despite his major birth defect his parents still loved him very much. So on his sixteenth birthday they went to find a doctor who could surgically give Eddie a body. When they got home they could barely wait to tell him, they went into his room and said "Boy have we got you the best present ever Eddie you'll love it!" And Eddie says "Oh no not another F***ing hat!"

Eddie the head is iron maidens official mascot. UP THE IRONS!!!

Hi my names Sam Dean, i picked Eddie as my username because, as you might guess, I'm a big Iron Maiden fan. These days you can usually find me using the title "The Iron Turtle" or just "Iron Turtle" on websites and all. I found this wiki when I was stuck for the eighth time on the Puzzle canal and I decided to Google it instead of never becoming a member of the Temple (I mean who actually tries to drown themselves?). I started playing TES with Morrowind on Xbox, a few years later I found Oblivion and realized that The Elder Scrolls III isn't just a title.— If you use firefox and you want to see something pretty cool and you have the daedric font downloaded, go to tools, options, content, make the default "oblivion" or "Oblvion worn" (names of the daedric fonts) and then click advanced and uncheck the box saying "allow pages to choose their own fonts..." and click ok. Now every page you visit will be in daedric, the recent changes looks particularly cool but check out all your favorite sites with that. Then just recheck the box when your bored (you will want to revert the text back to its original too). It doesn't work that well with dragon script. On chrome, go to options, under the bonnet, customize fonts, and select oblivion again. Once your bored of it just change it back to your default one.

This sentence has been distracted by a shiny object. It may be away for a while...

Opinions on The Elder Scrolls gamesEdit

It's fun for the first few hours and the first couple dungeons, then it gets boring and kinda repetitive, I never actually managed to finish it because my laptop broke halfway through my playthrough.

A major improvement over Arena, I've only played it for about 5 hours but it's defiantly good.

The best TES game hands down, no contest at all. Sure the graphics are lousy and the Combat is anything but easy but games aren't just about that. Morrowind has by far the best story and the most freedom. The lack of leveling, while most people think is a bad thing, is really a great thing, at the beginning if you stumble into the wrong cave then you better hope you have some Divine Intervention Scrolls on you, grab what loot you can and escape before you get screwed over by Daedra or big Orcs. And when you have reached the highest levels, you can actually have a feeling of ultimate power, punch a Ogrim to death, kill a Flame Atronach with a fire spell ect. And the Unique and weird creatures is what I miss most in the later games, Bethesda has been trying to rope in new fans and to do so they have been removing everything that makes TES, TES (at least to me). They have dumbed down skills and attributes and leveling and notice how many creatures they have just made up in Skyrim and Oblivion? From what I can tell... 1.. the Skeever, which ironically replaces one of the long established "normal" creatures, Giant rats.

Scary huh? Too bad this thing wasn't hard to kill unlike everything else in the game

Overall, a good game, good graphics, you can hit a enemy skills weren't dumbed down too much, you enjoyed yourself playing it the questlines were Ok. I wasted hundreds of hours on this, but the level scaling was the major problem, enemies got to powerful, you couldn't kill kind old wizards for their pretty armor to help you fight these enemies, you had to be a certain level to get a Daedric Artifact, and you couldn't just find them lying around in a dungeon, no siree. The fact you don't need to use skills to finish a guild was bad too, you could finish the Mages guild casting a couple spells, and on one of the only quests where you do need to use spells, theres a chest fulla scrolls just incase you don't have the specific spell. The thieves guild required a bare minimum of sneaking, or you could just run up to the item and steal it and pay the bounty off later, in the later quests when the Grey Fox removes the bloodprice, you can make it a bloodbath if you want. The dark brotherhood you could just swing an axe through the entire way as well. The fighters guild, I only completed once, and that was ages ago so I'm a little foggy on it, but I'm pretty sure that a mage can become the leader of the fighters guild.

So far, in my own opinion, the worst TES game in the series (let's not drag Arena and Daggerfall into this). Yes it has great graphics and great combat, it's the only TES you can fight in 3rd person on. But they have completely screwed up skills, attributes have been reduced to Health, Magicka and Stamina. Birthsigns and Specializations have been combined into 13 different stones, the warrior stone having the combat specialization instead of a good enchantment, the thief stone having the stealth specialization instead of something that increases your thieving skills, the mage stone having the magic specialization instead of allowing players extra magicka with no side effects. Character creation is now just making your characters looks (which is something that has improved) you can no longer choose your characters class. To reach the maximum level, you have to master every skill, no more saying "I'm gonna make a mage character" they have to do every skill just to get these precious perks. Perks worked in Fallout. They might of worked in Skyrim if they worked like Fallouts, but they don't and they don't work in Skyrim. The game was rushed, look at Assassin's Creed 3, they announced it, saying it's nearly done, but they are still working on it for a few months, Skyrim was barely finished when it was released. They just want to attract new people into the franchise, but barely any of these people are going to play back, because they are nothing like Skyrim, pretty much, they share a name and lore.

If that happens then I know that TES is no longer what I know and love. If one comes out, I won't be getting it.