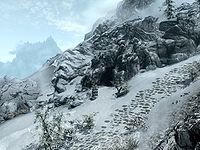 Stillborn Cave is a small cave north-northwest of Windhelm, on the other side of the mountains from the city which is occupied by Falmer, Chaurus, Chaurus Hunter.

The cave has two entrances, one along the road to Winterhold, and the other farther uphill. Falmer have made this cave their home, together with their chaurus companions.

The entrance leads into an ice tunnel heading south. The path soon turns to the west, where an ice melt runoff flowing from east to west is carving a rapid stream through the cave. Ahead is a leveled chaurus near some Falmer-style fencing in front of an exit to the west. The path follows the north wall around and down to where the chaurus is wandering. It is possible to reach the other side of the stream; however, there is nothing of interest over there. The western exit is an ice tunnel that turns to the south then back to the west before opening into a cave with an alcove to the north containing an unlocked Falmer chest. An exit is found to the west across from where you entered, and around the corner to the south is an empty gated Falmer tent, with a Falmer hive on the wall between the tent and exit. There is a patrolling Falmer behind the tent, and another hiding in the hive. An unlocked Falmer chest is to the right of the tent.

Taking the tunnel to the west, the tunnel turns to the north before opening into a cave with a magic-using Falmer that favors frost magic and another leveled chaurus. At the rear of the cave is a Falmer tent containing an unlocked chest, a Falmer shield, and a human skull. From the first cave, the path leads along the south wall around the front of the gated tent, rising behind the tent. Be careful, as there is a tripwire across the path that activates a claw trap hinged on a pillar to the right. On the right side of the pillar is an apothecary's satchel beside a copy of the Conjuration skill book The Warrior's Charge. Beyond this, a narrow tunnel heads to the southwest.

The tunnel turns to the northwest, then opens into another cave with a Falmer patrolling. In this cave, there is a caved-in tunnel to the south with a large coin purse on the ground in front of it, an exit to the north, and another exit past the Falmer to the west. After a short distance, the tunnel to the north opens into what appears to be an empty cave, with a novice-locked chest in front. However, there are hives in alcoves to your left and right, out of sight, both of which potentially hide Falmer ready to attack; human remains sprawled in front of the chest and riddled with Falmer arrows hint at this ambush.

From the previous cave, taking the exit to the west leads to another ice melt stream flowing north to south. There are several chaurus egg sacs around this stream. Following the stream south, the passage opens into a large cave with two leveled chaurus and a leveled Falmer boss. There are more egg sacs on both sides of the stream. The path rises along the east wall to an unlocked Falmer chest, hidden behind some fencing above the stream. The exit from this cave is found by following the stream south. This continues until the ceiling again becomes too low to proceed; at this point, there is a path to the east. This passage turns south once more, then leads to the second exit located uphill from the first.