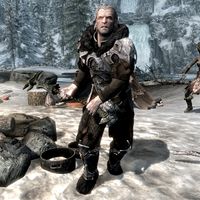 The Pirate Captain is a Nord enemy encountered at Haknir's Shoal, along with his pirate and pirate mage companions.

He wears a set of leveled heavy armor, up to steel plate quality, always including the cuirass and boots, and with a 50% chance to include the gauntlets and helmet. He carries a leveled heavy shield, up to ebony quality. He wields a leveled two-handed weapon, up to ebony quality, which has a chance of being enchanted. He carries 50-250 gold, depending on level. In addition, he carries a leveled dagger, which can be up to elven quality.

If you manage to sneak up on the camp, you can overhear a conversation between him and the pirate. The pirate is apparently excited at having dug up a treasure, saying, "See? I told you. Just where the map said it would be." but the pirate captain is skeptical. He worriedly replies, "We don't even know what's inside. And besides, there's... the curse." Acting amused, the pirate will confidently respond, "Don't tell me you believe that rot! Well, as soon as Jorn gets back, you'll see. You'll see."

When the trio of pirates notice you, they will become hostile, so be prepared. When the battle ends, you can loot the captain's corpse for a boss-leveled amount of gold and the Deathbrand treasure map, initiating the related quest.