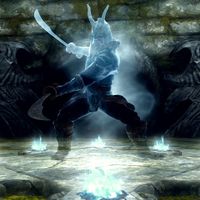 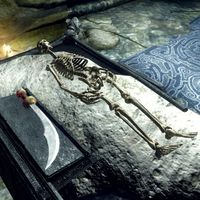 Haknir Death-Brand was a legendary Nord pirate king known as the "King of Ghosts" in the northern seas. When his skeleton is found in Gyldenhul Barrow during the related quest, his spirit appears to fight the player.

According to the book Deathbrand, he was known for rages and fits of madness, and he delighted in torture and murder for its own sake. He was said to have lived an unnaturally long life, and displayed a terrible scar on his face known as "the Deathbrand", which no man could look upon without flinching. Before his death, he told his crew that none were worthy to be his successor or have his treasure. He placed a curse on his armor and his scimitars, Bloodscythe and Soulrender. He commanded a crewman to bury his armor in four separate locations on Solstheim, each marked by a map, before sealing him in his tomb at Gyldenhul Barrow along with all his treasure.

Curiously, he is skilled at heavy armor, but his heavily enchanted and totally unique personal armor which you have to acquire in order to face him is a suit of light armor.

This Skyrim-related article is a stub. You can help by expanding it.
Retrieved from "https://en.uesp.net/w/index.php?title=Skyrim:Haknir_Death-Brand&oldid=2109824"
Last edited on 21 February 2020, at 23:47