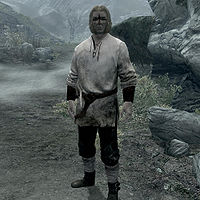 Perth is a Breton miner who works in Soljund's Sinkhole, a moonstone mine directly east of Markarth. Upon approaching the mine's entrance, he stops you, warning that it has been overrun by draugr. After completing the quest to clear the mine, you can sell moonstone ore to him for 30 gold and he becomes a potential marriage candidate.

Before you have cleared the mine, Perth will stand near the entrance around the clock, waiting for you to arrive, and will continue to do so until you surface (see bugs). Once the mine is clear, he will start his daily routine. He sleeps in the Miner's House every night between midnight and 7am and starts the day with a one-hour breakfast. At 8am he heads into the mine and works for twelve solid hours, interrupted only by one-hour meals in the house at noon and 5pm. He finishes work at 8pm and spends the evening inside the house, occasionally talking to fellow miner Tuthul.

Perth wears a set of miner's clothes along with a pair of boots. He wields a pickaxe and carries his key to the miner's house along with a selection of lower-class loot and gold.

When you arrive in Soljund's Sinkhole for the first time, you will find Perth near the mine entrance, along with a Reach Hold Guard. When he sees you, he will actively seek you out and warn you:

"Whoa, there. I don't know where you're going, but stay out of that mine. It isn't safe."

The mine isn't safe? Why?
"We tunneled into an old Nordic crypt. The whole place is crawling with draugr. We're not mining up any ore with those undead around, so I wouldn't go down there if I were you."

I go where I please.
"Fine, but there's a whole crypt of draugr underneath the mine. We're not going in there until the Jarl's men come to clear them out, so I wouldn't go down there."

Due to a bug, you will not have a choice, as the quest will start immediately after his response. He will add:

"We're keeping the mine closed until that crypt is clear."
"I hear talk about a regiment coming to clear the crypt out. We'll see if that happens."
"There's still plenty of ore left in that mine. What a waste."

When you surface after clearing the mine, Perth will be waiting outside where you can tell him the good news:

I cleared the mine of draugr.
"You did? We were waiting for the Jarl to send an entire regiment to clear that mine. Now we can get back to work. Thank you."

He will then hand you a leveled gold reward and will start to greet you with:

"Mining out this old rock is a lot quieter, now. Thank the Divines."
"Hard to believe there'd be an old crypt underneath the mine."
"We're getting back to work as best we can."

Inside the mine, Perth will often engage in conversations with his cowardly co-worker Tuthul:

Tuthul: "I feel like any moment, a draugr is going to come and chop my head off."
Perth: "Steel your nerves. The draugr are gone. Focus on your mining."

Perth: "Feels good to be mining again."
Tuthul: "How can you say that? This mine was filled with draugr not too long ago."

Inside the Miner's House, Perth will also converse with Tuthul, with the same effect:

Tuthul: "I don't think it's safe mining a cave on top of that crypt."
Perth: "There's a war on. We need every scrap of ore we can get, so we're going to keep digging. Understand?"
Tuthul: "Fine, but don't say I didn't warn you."

Tuthul: "Those draugr are going to be back. I can feel it."
Perth: "Don't be such a coward. We haven't seen any draugr since the mine was cleared. Be grateful."

Perth: "The guards say no draugr have come out of the mine."
Tuthul: "That's comforting. Glad they're keeping watch instead of getting rid of the draugr."

Tuthul: "Those draugr are going to come up and kill us all."
Perth: "They haven't moved out of the caves. I think we're safe."
Tuthul: "'We're safe' he says. You'll eat those words when a draugr is tearing into your face."

(Yes) "You're joking, right? Those bone-walkers will tear you limb from limb. But if you want to get yourself killed, go ahead."
(No) "Good to hear."