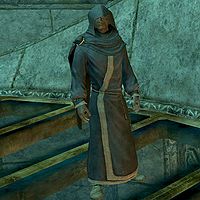 Paratus Decimius is a Synod mage working in the ruins of Mzulft.

Paratus is encountered during the quest Revealing the Unseen. Upon hearing that you were sent by the College of Winterhold, Paratus is very suspicious of your motives and is very secretive about the work the Synod is doing in Mzulft. He makes no secret of his disdain for the College.

He wears blue mage robes and a pair of boots.

Paratus is first encountered when approaching the door he has barricaded himself behind in the Mzulft Aedrome:

"G…Gavros? Is that you? I'd almost given up hope. Let me get the door…"

The door then swings open and Decimius is shocked to see it's not Gavros: "What the… Who are you? Where's Gavros? What are you doing here? What've you done with Gavros?" Your friend Gavros is dead.

"It was the Falmer, wasn't it? Curse them! They've ruined everything! If Gavros is gone, there's no hope. He was supposed to return with the crystal… Without that, all our efforts are wasted. And you. If you're here for treasure, or wisdom, or anything, I'm afraid you've wasted your time."

I came here looking for the Synod.

"And just why would you be doing that? Oh, it doesn't matter now. Gavros is never coming back, and he was supposed to have the crystal. Without that, we're lost. It's all been for nothing. So congratulations, whoever you are, you've found the Synod. Just me, alone, surrounded by angry machines and angrier Falmer."

What's this about a crystal?

"It didn't work the first time. I tried to tell Gavros, but he wouldn't listen. "No, it won't be too cold" he said. Well, I was right, wasn't I? Focused completely wrong by the time we got here! The cold had warped it! Gavros had to cart it all the way back to Cyrodiil. Left the rest of us here to fend off the damnable Falmer."

If I find this crystal you're looking for. Will you help me?

"I don't know what sort of help you expect from me, but if you can actually find the crystal I'd certainly be grateful."

What's the crystal for?

"It was a brilliant idea, really. Mostly mine, though Gavros took the credit. Secret, though. Official Synod business. Can't talk about it."

What are you doing here?

"I am on official business of the Grand Council of the Synod. That's all you need to know. I might well ask the same of you, running around by yourself in this dangerous place."

I'm looking for the Staff of Magnus.

"Are you? Well. I'm afraid I can't help you with that. I need the crystal to do anything useful, and I don't have it."

If the crystal was already found before speaking to him: I happen to have found a focusing Crystal. Is this what you were looking for?

"You found… how in the world… That's it. That's it! I don't know who you are, but you may have just saved this little project… In fact, who are you, anyway?"

I'm with the College of Winterhold.

"You are, are you? Savos wouldn't even grant us an audience when we came to you, but now you come here expecting something from me? I don't much like this, I'll tell you. But you've saved my skin, so maybe I can overlook the past for now. Come on, I'll explain on the way."

If spoken to before finding the crystal:

"Unless you can find that crystal, there's no point in wasting more time with talk."

Once the crystal is found, he will express joy: "Please, tell me you've found the crystal. I've no wish to die in this place." I found your crystal.

"Ha! So you did. I was almost beginning to think Gavros had gone and gotten himself killed just to spite me. Well, with the Falmer skulking around I can't very well do this on my own. I guess you'll have to come with me. I'll explain on the way."

Decimius will then lead you to the Oculory whilst speaking about his work:

"No matter what Gavros said, this was my idea first. The Council is going to know that when I get back. I was the one who thought of using this… this Oculory. I don't know what the dwarves called it. Something unpronounceable, I'm sure. From all our research, it seems they were intent on discerning the nature of the divine. This machinery, all of it, was designed to collect starlight, and then... I'm not sure. Split it, somehow? It was my idea to replace one of the key elements with our focusing crystal. Months of enchantments went into it. Let's just hope they got it right this time. Here it is. Magnificent, isn't it? Took an incredible amount of work to get it running again. Now I'm hoping it'll all be worth it. Place the crystal in the central apparatus, and we can start the process for focusing it."

If spoken to before placing the crystal: "It's very important you do this correctly." What do I do?

"Place the crystal in the center of the armillary. Then we can worry about attuning it."

Once the crystal has been placed: What do I do?

"Now the crystal needs to be focused. It was created so far away, we knew that some adjustments would have to be made. Heating and cooling the crystal will cause it to expand or contract, which will change how the light passes through it. You'll need to use spells to do that. Being from the College, I assume you know them already. There should be a few basic tomes around here somewhere in case your training is even more sub-standard than I've heard."

Once the crystal has been focused a map of Skyrim will appear: "Years of work, finally going to pay off… …but what's this? These results… They're not at all what they should be. This projection should be lit up like the night sky… Something is creating an incredible amount of interference. Something in Winterhold, it looks like. What are you playing at? Is this some attempt to stall my work?!"

Decimius can then be spoken to, where he will accuse you of causing the interference:

"So, what is it? What have you done? Did you know what we were attempting? Are you here to make sure your plan worked, that our efforts have been for nothing? Well, explain yourself!"

You'd better calm down.
"You and your College have ruined years of my work, I've lost colleagues and friends to the Falmer, and you want me to calm down?"
Did something go wrong?
"Go wrong? Go wrong? Everything is wrong! Everything! Whatever you have at that College has completely interfered with out work here."
I don't know what you're talking about.
"You show up here, just as our work nears completion, and now I can't get any results from this because of something at your College. Do you think me a fool? Do you think I'm too stupid to make the connection?
How did you do it?"

I haven't done anything, I swear.
"But it must be something you're doing. There's no other explanation…"
I truly have no idea what you're talking about.
"Either you're lying to me, or…"
I don't understand why you're so upset.
"Just look! This should be lit up brighter than the night sky, and it's not! Clearly you've interfered somehow. Or…
You have something at your College, don't you? Something immensely powerful. Beyond anything I'd anticipated. What is it?"

You mean the Eye of Magnus?
"The Eye of Magnus? Well, I suppose if that means what I think it does… Well, that's interesting."
We might have something, yes.
"Well, now. This I hadn't considered. If that's taken into account, these results make more sense."
I'm not going to answer that.
"So you do have something, then. Whether this was intentional or not, it suggests some interesting results."

What are you talking about?
"You're looking for something, yes? The… Staff of Magnus. Well, even if you are trying to ruin my work, there's still something to be learned here."

Can you help me find the Staff of Magnus or not?

After this revelation he will calm down and explain the idea behind the project:

"I can't explain the details. That would be giving away many secrets the Synod have learned over the years. Also, I doubt you'd be able to comprehend the details. Have you ever seen the Orrery in the Imperial City? It was the inspiration for this idea. Instead of projecting the sky, we project all of Tamriel, and then harness the latent energies to overlay the positions of… What's important is that all of this work was designed to reveal to us sources of great magical power. Purely to help safeguard the Empire, of course. And yet, in the end, only two locations have been revealed to us. One is your College. The other… Well, that can only be Labyrinthian."

Once spoken to after this explanation:

"So, mage from Winterhold, despite your intentions I've beaten your little game. Even if all you said here is lies, I know you have something in Winterhold the Synod Council will be very interested in. So fine, trudge off to Labyrinthian in search of your Staff. I shall return to Cyrodiil and deliver my full report to the Council. This is not over, I assure you."

So the Staff of Magnus is in Labyrinthian?
"Well, yes. Probably. I mean, yes. Certainly it is, but that doesn't matter now, because I know you're hoarding something even more important at your College. The Council will be informed of this. They will find out what you're up to."
I think you've been in here too long. You're crazy.
"Am I? Am I? I think I've discovered more here than I could've hoped to. Your trickery won't confuse me.
I think we're done here."

If spoken to again he will only say:

"You've got what you came for, didn't you? Go then, back to your college."