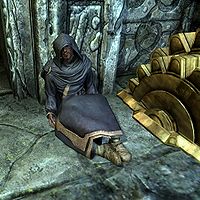 Gavros Plinius, an Imperial sorcerer, is a member of the order of the Synod, and can be found upon entering Mzulft during Revealing the Unseen.

You will find Gavros in the very first room of Mzulft, heavily wounded and seemingly dying. His final words are: "Crystal…. gone… [coughing] Find… Paratus… in Oculory…" After saying those final words, he dies. He wears blue mage robes and boots, and carries a research log as well as a key necessary to go further into the ruins. He is mentioned by his fellow Synod member Paratus Decimius, who states that Gavros claimed that the idea of using a crystal in the Oculory was his own.