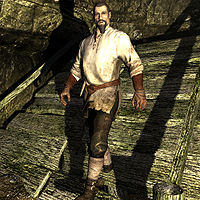 Odfel is a Nord miner that lives in Shor's Stone and is a potential marriage candidate. Odfel states that he used to be a soldier and acts with a general disdain and smugness towards others.

Odfel starts off his day by waking up at 5am and spending an hour resting in his house. At 6am, he heads off to Redbelly Mine to start work. He works at the mine for most of the day, tirelessly mining for twelve solid hours. At 6pm, he finally stops working and goes home to rest for an hour. At 7pm, he goes to the campfire in the middle of town. He spends four hours sitting around the fireplace and sometimes using the cooking pot. At 11pm, he heads back home to sleep for six hours, and repeats his schedule the following day.

Odfel wears a set of miner's clothes along with a pair of gloves and boots. He carries a pickaxe, the key to his house, a belted tunic, and a selection of common loot and gold.

Before taking care of the frostbite spiders inside the mine, Odfel can often be heard complaining about them:

"Everything was going great in Redbelly. Then the damn spiders showed up."

"You think you're tough, huh? Wandering Skyrim is a picnic compared to tunnel crawling!"
"The real work happens in places like this. Blood and sweat is what makes the world turn."
"Sure, I used to be a soldier... but that was child's play compared to cracking rock."
"Mining's my life now, I wouldn't want to do anything else."

If spoken to directly:

Tell me about the mine.
"Mining iron takes a lot of strength and special reinforced tools. I must have broken five or six pickaxes in the last few months alone. But now that I've got Rocksplinter here, I can cut through stone like a hot knife through butter."

Upon ending conversation he will say:

"Fortune to you and your children."

Odfel: "You think living with Grogmar is easy? Did you see how he lives?"
Filnjar: "You two will just have to learn to get along until we can build you another house."
Odfel: "At this rate that'll never happen."
Filnjar: "Quit your bellyaching. We've all got our problems."

He can complain to his housemate Grogmar too:

Odfel: "All I'm asking is that you clean up once and a while. How you can find anything in your half of the house is beyond me."
Grogmar: "I'd rather spend more time in the mine hauling up iron than doing woman's work keeping the house clean."
Odfel: "I'll have you know that I can haul up just as much iron as you in a day and still manage to clean up my messes."
Grogmar: "You think so, huh? Maybe you'd like to put some Septims behind that boast."
Odfel: "You have yourself a bet."

He has a crush on his co-worker, Sylgja. One of his apparently numerous attempts to woo her can be heard when the mine workers gather around the campfire at night:

Odfel: "Grelka [sic], do you fancy a walk tomorrow?"
Sylgja: "Odfel, I've told you time and time again. I'm not interested in a relationship with you."
Odfel: "And why not? I'm handsome, strong and smart. What else could you possibly need?"
Sylgja: "I need someone that cares about me more than they care about themselves. That person isn't you."